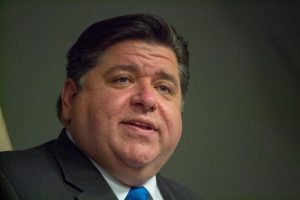 Those were two of the topics discussed during a 10-minute interview with Capitol News Illinois on Wednesday, July 21 as part of a two-day media tour held by Pritzker after his announcement two days prior that he was seeking reelection in 2022.
The reason Pritzker won’t consider using federal ARPA funds on the $4.2 billion Trust Fund deficit, he said, is because he did not believe it a permissible use of the funding, and he is hopeful that the federal government will provide aid or rule changes to accommodate the 17 states that have outstanding federal borrowing balances in their trust funds amounting to $54 billion cumulatively.

“You can’t actually use ARPA funds according to the rules of ARPA. You can’t repay any debt that’s already owed to the federal government,” Pritzker said in the interview with CNI, citing the state’s initial plan to repay pandemic related Municipal Liquidity Facility funding with the ARPA funds — a use later ruled impermissible.

Interim U.S. Treasury rules for ARPA funding and the plans of dozens of other states, however, contradict the governor’s statement on the use of ARPA funds to repay the Unemployment Trust Fund deficit. The Associated Press reported on May 27 that “at least 29 states already have transferred or proposed to use a total of more than $12 billion of federal coronavirus aid for their unemployment trust funds.”

Per the interim final rule, published May 17 in the Federal Register, “recipients may make deposits into the state account of the Unemployment Trust Fund … up to the level needed to restore the pre-pandemic balances of such account as of January 27, 2020, or to pay back advances received under Title XII of the Social Security Act.”

“States facing a sharp increase in Unemployment Insurance claims during the pandemic may have drawn down positive Unemployment Trust Fund balances and, after exhausting the balance, required advances to fund continuing obligations to claimants,” the Treasury guidance reads. “Because both of these impacts were driven directly by the need for assistance to unemployed workers during the pandemic, replenishing Unemployment Trust Funds up to the pre-pandemic level responds to the pandemic’s negative economic impacts on unemployed workers.”

During a recent trip to Washington, D.C., Pritzker said, he spoke to President Joe Biden and Illinois’ congressional leaders to seek further federal assistance for the Trust Fund. He expounded July 21 on what changes might be possible.

“Some of this has to do with whether or not there could be legislation that’s passed. And some of this is really changes in the rules that could be made,” he said. “Certainly, if we could extend the due date of the Trust Fund deficit to the federal government, that might be of assistance to us. So we’re looking at everything that’s available to us, because you know, all of us have the same goal, right, which is to get that deficit down without it being a burden to businesses or to workers.”

Business groups last week called on Pritzker to reinstate more stringent work search requirements for Illinoisans who are on unemployment, to end a $300 federal monthly payment to unemployed individuals earlier than its September end date, and to infuse the Trust Fund with federal ARPA dollars.

Each state has an Unemployment Insurance Trust Fund account maintained by the U.S. Treasury but funded by the state’s businesses through insurance premiums collected via payroll taxes. The rates at which businesses pay into Illinois’ fund are determined by a complex statutory formula.

While use of the ARPA funding would have to be approved by lawmakers, Pritzker’s administration and former governors have generally been heavily involved in the negotiating process on unemployment issues.

But Pritzker said he is hopeful federal action might come through before that time period. Earlier this month, Illinois’ U.S. Sen. Dick Durbin, a Democrat, said he expects Congress to begin debating the next steps on unemployment as the current federal boost to benefits ends in September.

“The question is, where will we be based upon the support that we may get from the federal government and the reduction of the number of people who are on unemployment? So we’ll have to see where that ends up,” Pritzker said.

For his part, Pritzker said he has expanded child care availability in an effort to encourage a return to the workforce and alleviate stresses on the system.

“The biggest thing that’s keeping many people from getting back to work is the fact that they have to handle child care. Sometimes it’s senior care. People who stepped out of their jobs because they needed to take care of somebody at home,” he said. “And so we’ve expanded massively the availability of child care, particularly for those up to $60,000 in earnings. …We now have available to people $1 a month child care, that’s for people who are at the poverty level and up to 250 percent of poverty level, people being able to pay only 7 percent of their earnings. So that’s a significant move forward to help people get back to work.”

As for the pandemic, Pritzker said his medical advisers tell him the main focus for monitoring disease spread should be intensive care bed and hospital bed usage. But he has not set a concrete metric for those numbers that would trigger another round of mitigations.

Those numbers were increasing statewide as of Wednesday night, although they were still far off pandemic highs. There were 119 ICU beds and 628 hospital beds in use by COVID-19 patients as of July 21. The state’s 3 percent case positivity rate was a high since May 7, five times its June 27 rate of 0.6 percent.

Still, the governor said he wasn’t considering vaccine passport requirements at this time.

Pritzker also touched on the state’s fiscal outlook and whether an energy bill is likely to pass the General Assembly this year.

LISTEN TO THE CAPITOL CAST INTERVIEW