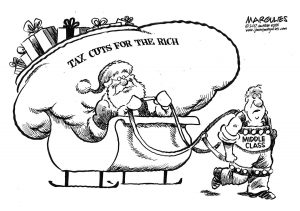 My wife spends a lot of time rolling her eyes. She knows, for instance, that when we meet at the end of the day and she asks, “How was your day?” as she always does, I’ll have a Dickens of a response: “It was the best of days, it was the worst of days.”

It’s not often that I have all that much in common with Donald Trump, although I bet Melania rolls her eyes a lot, too. However, the first of December certainly was a “best-worst” kind of day for the president. Special counsel Robert Mueller’s investigation into Trump’s “Tale of Two Cities” — namely Washington and Moscow — lobbed a Mike Flynn at the White House.

The former national security adviser for all of 24 days has pleaded guilty to a charge of lying to the FBI. More significant than his brief official capacity is that Gen. Flynn had been a Trump confidant during the campaign. Presumably, he knows where the bodies are buried and now obviously has agreed to help Mueller unearth them.

With his plea deal, Flynn makes it clear he’ll do whatever it takes to avoid prison. The question is, Does he have the goods on those higher up on the administration food chain to threaten their liberty? Are any of them having a hard time with the growing threat of hard time? And a biggie: Did the president, in a recent Twitter tantrum, implicate himself?

Trump tweeted after the guilty plea that he knew Mike Flynn had lied to the FBI when he asked Jim Comey, then head of the FBI, to go easy on him. Trump, of course, subsequently fired Comey and now denies that he intervened on his buddy Flynn’s behalf. Obstruction of justice is a crime, so that tweet has caused no small amount of handwringing at the White House.

The next morning, however, the administration suddenly was in celebration mode after Senate Republicans were able to sneak out a tax bill and finally give the party a glide path to a legislative accomplishment. Of course, this best of days for the GOP and the party’s wealthy puppeteers may be the worst for the rest of us. Assuming the House and Senate versions can be reconciled (and that’s a safe assumption), the package will add a trillion-plus dollars to the national debt and fill the already overflowing coffers of the rich.

Republicans justify all this with fiction worthy of Charles Dickens. They rely on variations of the old-time, discredited supply-side argument that tax cuts for corporations and the wealthy create jobs and higher salaries because the beneficiaries take their tax savings and invest into job-creating expansion. It doesn’t work that way.

Instead, they use the billions of dollars to juice up their investments. What job creation there is comes from the few people who are hired to construct still more opulent vacation properties, private jets or huge yachts for the oligarchs. Meanwhile, everyone else pays for it with reduced health care coverage or less financial support for education, on and on ad nauseum.

—A Dickens of a day–