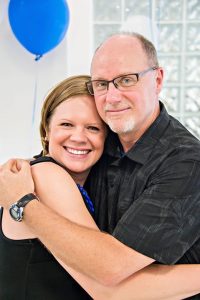 Little did he know that he was about to make Woodstock High School and Woodstock his home. His focus was on getting his first job as a choral director.

Nowhere in his young imagination did he foresee that 33 years later, students from around the country would fete him with a retirement gala, many with their own careers in music.

On June 4, more than 350 people gathered at Woodstock High School to honor their former teacher, mentor, and friend.

Coordinated by Carrie Filetti, many former students, teachers, and colleagues worked together to create a song-filled gala.

“Some of my colleagues are my former students,” said Rausch. Five 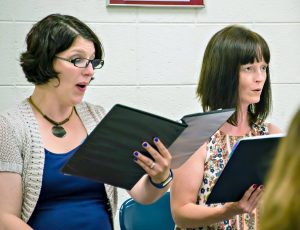 Although Rausch taught choir at Woodstock High School his entire career, he directed choir at several churches, including Resurrection Catholic Church in 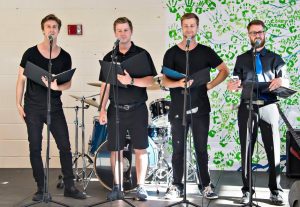 “There was a time when I thought about teaching somewhere where the pay was better,” Rausch admits, “But Woodstock was where I wanted my family to grow up.”

Rausch loves the artistic environment and the support for the arts that the area offers.

The ideas that students from the past 33 years would put together a program like this almost overwhelmed Rausch.

“It was wonderful,” he said. “Different eras of my career, from 1984 to current graduates, got together to form choirs.”

Choirs from the past got together and practiced new and familiar tunes. The “Sunshine Spirit,” jazz choir, Madrigal singers, a swing choir, were some of the groups represented.

Filetti sent music and sound files to those who were attending. On June 3, they had a rehearsal. Three numbers combined all the choirs. Nestled between the choir numbers, was an open micsession where former students toasted Rausch and let him know how his dedication influenced their career and their life.

Melinda Songer Teague, from North Carolina posted on the Paul Rausch public Facebook group, “I can’t tell you how much joy is in my heart as I head home from singing with all of you for Paul!!! Here’s to beautiful music together!!!”

Natasha Bloom added to that sentiment, “Such a magical weekend celebrating the career and influence of an incredible man.”

Rausch participated in chorale programs in middle school and high school, so he knew music would always be part of his life. It wasn’t until in a conducting class that he knew teaching was what he wanted to do. His aha moment came with his first conducting assignment.

“Each student-director had to choose a familiar song to conduct,” he said. “I chose ‘Silent Night.’ The professor said that some people when they start conducting have a way of transforming the sound of the choir. Some people can capture the essence of the music through their fingers. When I conducted the class that day, the kids were doing so many musical things in response to my gestures. It was thrilling. Then the prof said, ‘that’s exactly what I’m talking about.’ I knew that’s what I’d be doing the rest of my life.”

For Rausch, teaching is about more than the music.

“I always try to create where students are comfortable, can work together and try new things without judgment. A choir is like a family.”

Rausch looks at high school as formative years. Students are getting a sense of who they are.

“I will miss watching them grow. It’s really all about teaching young men and women to be responsible adults, with music as the avenue,” he said. “I will miss the daily contact.” After a slight pause, he laughed and said, “I’ll miss making music, too.”

Jillian Chase summed up what many people felt about Rausch, “Paul always had high expectations for his choirs, it didn’t matter which one you were in, he challenged us with repertoire, musical terms and sometimes even foreign languages. Whether or not we believed we could do it, Paul always believed that we could meet the challenges if we worked hard, listened to each other, and worked together. I am forever grateful for everything I learned. I do what I am doing today, because I grew in confidence and ability studying under him. So, thank you, Paul, for your passion, your commitment and your unwavering support to all your students, and to music! “