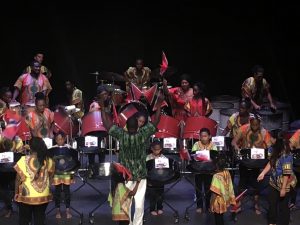 A group of students from Trinidad and Tobago perform a steelpan concert Aug. 30 at the Woodstock Opera House. (Photo by Adela Crandell Durkee/for Chronicle Media)

A group of students from Trinidad and Tobago performed in a once-in-a-lifetime opportunity on Aug. 30, at the Woodstock OperaHouse.

The 60-piece band included students from 6 years old to adults in their 30s. Their economic background spans nearly as wide a spectrum: from the homeless to the privileged.

What they have in common are their teacher, Akinola Sennon and Siparia Deltone’s Steel Orchestra.

Many people from the Woodstock community came together to help make the event happen. Woodstock Opera House donated the space for the evening. Private donors helped transport, houses and feed the band members. Cathy and Jim Potts helped by housing and feeding many of the band members, as well as helped with transportation.

Thirty of the drums the performers played were crafted by Matt Potts from “Cultural Arts and Music,” Woodstock, with the help of Ronald Matthews, a master Steelpan builder from Trinidad.

The two artisans worked practically around the clock to make and tune the drums. Potts’ dedication to steelpan music and the culture impressed Matthews when they met at the annual Great Lakes Steelpan Festival in 2013. It was Matt Potts’ enthusiasm for the steelpan culture that created the energy for the “Cousoumeh!” concert.

“The experience has been phenomenal,” said Matt Potts. “Everyone has been blown away by the group’s performance.”

The Steel Orchestra also played at area schools and churches. The range of sound created by the pannists and the steelpans fooled many concert listeners into thinking there were brass and woodwinds in the band. “What a bargain for a $5 ticket,” said one concert-goer. “I’d gladly pay over $40 for something like this.”

The concert incorporated music and dance to tell the story of the evolution of Steelpan music. Steelpan history can be traced back to the enslaved Africans who were brought to the Caribbean islands during the 1700s. They carried with them elements of their African culture including the playing of hand drums. These drums became the main percussion instruments in the annual Trinidadian canboulay festivities. The conboulay festival is the slaves’ version of their owners’ carnivale.

In 1877, the ruling British government banned the playing of drums because of the offensive nature of “canboulay.” Bamboo stamping tubes soon replaced the hand drums as they produced sounds comparable to the hand drum when they were pounded on the ground. These tubes were played in ensembles called tamboo bamboo bands. When even the tamboo bamboo drums became forbidden, nontraditional instruments made with scrap metal, metal containers and graters developed.

The metal pan players discovered that the raised areas of the metal containers made a different sound to those areas that were flat. Through experimentation, coincidence, trial and error, and ingenuity on the part of numerous innovators, the metal pan bands evolved into the steelpan family of instruments. As the pan makers’ knowledge and technique improved, so did the sound of the instrument.

Potts makes and sells steelpan percussion instruments from previously used 55-gallon drums. He and his business partner, Anthony J. Houston promote the steelpan music in a variety of ways. Their nonprofit arm performs as “Potts & Pans” band, as well as outreach events for teachers, community groups, school assemblies, and library shows. They also do corporate events and team-building exercises.

Both Potts and Houston, graduates of Prairie Ridge High School, have college degrees in music education. Potts began making steelpans over eight years ago. He started a retail store when he was still in college. Potts said, “I always liked working with my hands. I became fascinated with making the steelpans

“I start with a six-inch sledge hammer,” explained Potts. As the work progresses the hammer gets smaller. “I use smaller hammers to add and release tension as I adjust the harmonics.”

It’s physically challenging work. Potts works on a new drum for seven to eight hours a day. Potts and Matthews often worked from 7:30 in the morning until 1 the next morning to tool the steelpans. Matthews “literally lived at the studio,” said Potts. “He slept on a mattress in one of our recording studios.”

Anyone interested in learning how to play the steelpans can attend Monday from 6-7:30 p.m., when the Earth Steelband plays. Anyone over 10 years old is welcome. On Tuesday 6:30-8 p.m., adults of all levels of expertise get together as the Wind Steelband. A more experienced Fire Steelband meets on Thursday 5-6:30 p.m.

Potts and Houston teach lessons and started a “Latin-Funk” trio as an offshoot of one of the regular steelpan bands. Houston’s specialty is the vibraphone, common to jazz. Christina Guerrero joins the group on flute.

For more information about Cultural Arts and Music or the Great Lakes Steelpan Festival, visit PottsandPans.com.