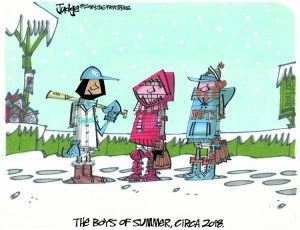 In spite of all the controversy about Scott Pruitt’s cushy D.C. condo, it’s entirely appropriate that he was getting a sweetheart deal on a place to sleep. After all, for his entire political career, he’s been in bed with the special business interests who resist any and all government efforts to protect against their ravaging of the environment.

In Oklahoma, as a state senator, then attorney general, and now the Trump administration’s Environmental Protection Agency administrator, Pruitt has been a stalwart opponent of any regulation that would get in the way of the energy companies that have been his patrons. They and their extremist advocates have rewarded his efforts on their behalf handsomely.

Now that he has brought their bought-and-paid-for agenda to Washington, he has turned the EPA into the “Environmental Punishment Agency.” He has been dismantling clean-planet rules left and right, and dogmatically ignoring climate change science as he represents big business in pushing President Donald Trump’s anti-regulation agenda.

He’s also been living large, or trying to. His ridiculously cheap living arrangement at a lobbyist-owned apartment within spitting distance of the Capitol has been exposed by media reports, so he violated scoundrel rule No. 1 — which, of course, is “don’t get caught.” He was charged $50 dollars a night, far, far below market rate in D.C., but even with all the industry largesse, he’s gotten greedy. And clumsy.

In fact, Pruitt is quickly becoming legendary, even by Washington’s dreary standards. His insistence on spending $40,000-plus of taxpayer money to construct a soundproof telephone room at his agency for his use was just one embarrassment. Until the drumbeat of criticism got too loud, he insisted on flying first class. EPA policy requires economy seating, with permission granted for an upgrade in exceptional circumstances.

Pruitt has adopted a policy of avoiding any but the friendliest, churning out interviews with the likes of Fox News and the right-wing Washington Times. However, even the Fox News interview was awkward, with correspondent Ed Henry asking tougher questions than he expected. He fumbled them, plain and simple. Looking bad on TV is the original sin in the Gospel According to Donald Trump.

So down at Casa Blanca, el presidente is trying to determine whether all the bad publicity is enough to add Scott Pruitt to the list of those he must replace. On the one hand, Pruitt has been shamelessly effective at gutting environment-saving regulations at the EPA. That pleases POTUS, who insists he has full confidence in Pruitt.

But is that the Don Trump Kiss of Death? The indicators are becoming familiar. The president and maybe chief of staff John Kelly assure the unfortunate one that they have his back. At the same time, Sarah Huckabee Sanders or another White House-designated knife-wielder makes it clear that they possibly mean that his back is there to stab. So here was Sanders, making sure reporters knew: “We’re reviewing the situation. When we have had a chance to have a deeper dive on it, we’ll let you know the outcomes of that.”

Scott Pruitt may be the next to take the dive … with concrete. If he’s smart, even while he struggles to stay on, he’ll be making sure all those wealthy special interests are there when he leaves power, so he can cash in his chits.