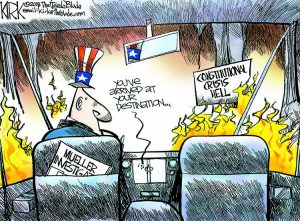 In Washington politics, rarely does anybody fully mean what he or she says. But few who know Paul Ryan doubt that he’s sincere when he explains that he’s abandoning his all-consuming job as House speaker to spend much more time with his wife, Janna, and their three kids. Believe it when he says he’s not running for re-election to Congress because he’s longing to be more than a “Saturday dad.” So, he’ll be going home to Janesville, Wisconsin, as a private citizen next year. However, another reality in Washington is that there usually is more to the story.

The speaker is immensely powerful on paper, being second in line for presidential succession and leading the House of Representatives. But leading this group of House Republicans is an exercise in frustration. True, they hold a majority in Congress, but that’s illusory. In fact, the GOP is badly split between conservatives, extremists and wackos. Trying to please them all is impossible. They run roughshod over each other as often as they do the hapless Democrats.

All too often, the roughshodee is Paul Ryan — even though he has a longstanding reputation as an ambitious man who has been able to have it both ways, a harsh but reasonable-appearing right-winger. But now he wants to step off for a while, or at least have it appear that he is.

Now that Donald Trump has taken over, Ryan’s survival skills dictate that he embrace the president at the same time he keeps him at arm’s length. That’s exhausting, and increasingly difficult, particularly since Trump has this tendency to go kablooey as the walls close in. And they’re closing in. Special counsel Robert Mueller’s investigation is grinding on, and POTUS is in a tizzy. He’s lashing out, and who knows what he’ll do as the pressure builds.

Washington is not the place to be for someone who wants to position himself as a leader of the “I told you so” gang after the kablooey really hits the fan. Ryan’s hometown is about as not Washington as any place can be to escape the splatter.

Besides, in Speaker Ryan’s case, he certainly has calculated that the time has come to get out while the getting’s good. It’s no fun being a minority leader, and it’s looking like the GOP might just lose control of the House. Forty-plus Republican members are exiting stage right, or being forced out because of scandals. If the Democrats avoid the tendency to squander their own momentum and actually assume the majority, Donald Trump’s presidency might well be toast, particularly if Mueller lowers the boom or Trump lowers it on himself.

Meanwhile, back under the Capitol Hill big top, the circus will become a political freakshow as those Paul Ryan left behind try not to look like clowns as they maneuver to replace him. The difficulty is to break out the long knives while not appearing to be a crude back-stabber. But now Paul Ryan can be above all that.

If you don’t think all of this has occurred to Ryan, I have some dairy land in Wisconsin I can sell you. Soon, he will be back in Janesville with the family. He insists that he won’t run for office again. Don’t bet on it.

—Ryan gets out while the getting’s good–