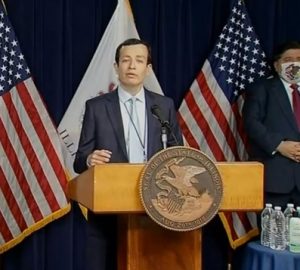 Acting Illinois Department of Commerce and Economic Opportunity Michael Negron is pictured at an Aug. 12 COVID-19-related news conference in Chicago. DCEO announced Wednesday, Aug. 19 that it has awarded $39.5 million in grants for 26 capital improvement projects around the state aimed at boosting summer employment. (Blueroomstream.com)

SPRINGFIELD – The Illinois Department of Commerce and Economic Opportunity awarded $39.5 million in grants Wednesday, Aug. 19 for 27 capital improvement projects around the state.

The agency is hopeful the grants will boost summer employment and attract economic development in underserved communities.

The improvements are funded through a portion of the $45 billion Rebuild Illinois program that state lawmakers approved in 2019. As part of that five-year program, $4.7 billion was allocated to DCEO for projects tied to local economic development.

Originally about $50 million was earmarked during the first year of the program for public infrastructure projects, but earlier this year the agency set aside around half of that money for what it calls “fast-track” projects, those that can get underway as soon as the funding is in place, according to Negron.

The goal was to boost summer employment, which has taken a severe hit during the current recession brought on by the COVID-19 pandemic.

“We cut in half the public infrastructure funds for year one and put it on a faster timeline, prioritizing projects that were just about ready to go so that we could get those dollars and then get shovels in the ground this year, so that people could get to work and infrastructure get repaired or modernized,” Negron said.

Among the public infrastructure projects being funded that officials hope will have lasting economic impact is the long-planned canoe launch and river walk in Calumet City, just south of Chicago along the Little Calumet River.

“If that project fully comes to fruition, over its long-term strategy, you’re looking at something that can, in addition to providing some benefits to the residents who can come and enjoy the river run, there is economic development that can happen around it similar to what we’ve seen in in the river walks and other cities In Illinois and across the country,” Negron said.

The state is investing $1.4 million into that project through Rebuild Illinois, but city officials announced earlier this year that they are also receiving $480,000 through the Illinois Department of Natural Resources.

The agency is also funding less glamorous projects to improve public infrastructure, which are nonetheless vital to communities on the receiving end of grants. In Normal, $590,000 is being put into replacing a water main.

“With all of our added challenges this year, local budgets are stretched to the breaking point,” state Rep. Dan Brady, R-Bloomington, said in a statement. “I am very appreciative of the administration and DCEO for this much-needed assistance.”

In addition to the nearly $25 million in fast-track grants, DCEO is also giving $14.7 million to projects in opportunity zones.

Unlike the fast-track funding, which was limited to local governments and public entities, opportunity zone funding was also open to private developers that could bring in matching funds from non-governmental sources.

About half of the opportunity zone funding released Wednesday, $7.5 million, was awarded to real estate investment company New Pathways Investments LLC to construct a multi-purpose sports and events center in Centralia.

According to the DCEO, the construction of that event center and the 9 other opportunity zone projects will draw an additional $30.3 million in outside funding to support affordable housing, community development, and commercial real estate.

According to Negron, the planned work at the 27 sites will create about 600 construction jobs immediately.

“And then beyond that there are hundreds of permanent jobs that will come out of it, particularly those types of projects that are enabling a future development,” he said.