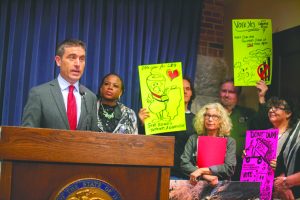 Rep. Mike Marron, R-Fithian, and Rep. Carol Ammons, D-Urbana, are joined by advocates at a news event May 21 at the Capitol in Springfield as they speak in favor of Senate Bill 9, which aims to ensure safe closure of toxic coal ash pits and financial protections for taxpayers should the pits cause environmental disasters. (Photo by Jerry Nowicki/Capitol News Illinois)

SPRINGFIELD — A bipartisan group of legislators and environmental advocates on May 21 urged the passage of a bill to ensure safe closure of toxic coal ash pits and financial protections for taxpayers should the pits cause environmental disasters.

Senate Bill 9 awaits action in the Illinois House, where its sponsor, Democratic Rep. Carol Ammons of Urbana, said she believes the chamber will have the votes to pass it, possibly with a few “technical” changes.

When coal is burned to produce power, it leaves behind a byproduct called coal ash which contains heavy metals such as mercury and arsenic. Those are harmful to humans, fish, and wildlife and can seep into surrounding earth and groundwater. In many cases, coal ash is placed in unlined pits, where it remains long after the power plants are closed.

There are approximately 25 known coal ash impoundments which are already closed in the state. Senate Bill 9 would establish processes to address the other 50-plus impoundment sites which have yet to close. 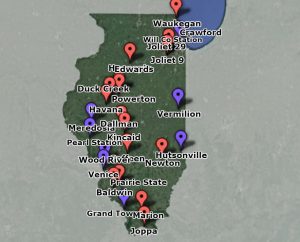 The bill would require a coal ash impoundment owner to submit to the EPA a “closure alternatives analysis” addressing several closure scenarios and options laid out in the legislation. It would give the EPA the authority to choose the safest plan for coal ash remediation.

Senate Bill 9 would also create initial fees of $50,000 for each closed coal ash plant and $75,000 for those that have not yet closed. Owners of operational impoundments would then pay an annual fee of $25,000, and a $15,000 fee would be charged for closed plants that had not yet completed “post-closure care.”

State Sen. Scott Bennett, D-Champaign, who ushered the bill through the Senate, said during floor debate the fees would allow the EPA to hire hydrologists, engineers and others to ensure safe closures.

Rep. Michael Marron, a Republican from Fithian, said the Middle Fork of the Vermilion River is surrounded by unlined coal ash pits, and the path of the river is changing course into the pits, causing coal ash to seep into groundwater. Marron co-sponsored Senate Bill 9 in the House and said its passage is urgent to prevent future instances similar to the one in Vermilion County.

“There are approximately 84 sites where coal ash is stored in Illinois, so coming to the table to discuss a clear and concise set of guidelines to curb future pollution is imperative,” Marron said.

“A theme of so many press conferences in this room is Illinois is addicted to crisis. We care after the problem happens. But we don’t do anything to get in front of the problem and make sure we avoid the problem. We’re trying to change that trend with bills like Senate Bill 9,” Bennett said.

The legislators were joined by representatives of the Illinois Environmental Council and several other environmental groups at a news conference in the Illinois State Capitol Blueroom to advocate for passage of the bill.