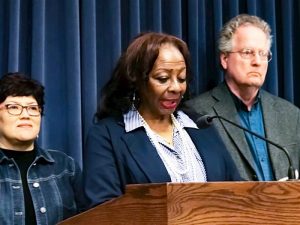 Sen. Mattie Hunter, D-Chicago, speaks at a news conference at the Illinois State Capitol in 2019, addressing the state’s affordable housing shortage. She passed a bill out of committee that would create state tax credits for affordable housing projects. (Capitol News Illinois file photo)

SPRINGFIELD – A bill that would offer state tax credits to owners and developers of affordable housing units has passed out of committee at the Illinois Capitol.

Proponents of the legislation, including Hunter, said tax incentives are an important first step to addressing the state’s affordable housing shortage.

“Many Illinoisans suffer from housing insecurity,” Hunter said in a Friday statement. “Between problems that existed before the pandemic such as discrimination in lending and lack of affordable options for residency, the COVID-19 pandemic only made things worse.”

“This pandemic has been hard on landlords as well, and (I) wanted to make sure that both parties could benefit from affordable housing. It is my hope that this legislation paves the way for a new standard in the Illinois Housing industry if passed,” she added.

Under the proposed bill, developers would qualify for a state tax credit if they agree to set aside at least 20 percent of units in a property for low-income renters in areas with low affordability, or, at least 15 percent of a multifamily building’s units are occupied by households with low or extremely low incomes for a period of 10 years.

According to the advocacy group Housing Action Illinois, the bill would allocate $35 million annually via federal tax credits that are currently “left on the table,” and is expected to result in over $875 million in affordable housing investments and an additional 3,500 affordable housing units per year.

Bob Palmer, policy director for Housing Action Illinois, said that if passed, the new bill would be “the most significant” housing legislation to pass the General Assembly in recent years.

According to data from the National Low Income Housing Coalition, Illinois is facing a shortage of approximately 268,000 housing units for renters at or below the poverty line, and there are only 39 available units for every 100 renters at “extremely low income” levels, designated as earning less than 50 percent of their area median income.

Palmer said the intention of SB 2445 is to create “long-term affordability” in Illinois’ housing stock.

“(The bill) strengthens a state law that is meant to encourage communities with a very low amount of affordable housing to build more,” Palmer said.

“It’s very comprehensive. It’s certainly not the entire solution, but it’s a very positive step in the right direction,” he added.