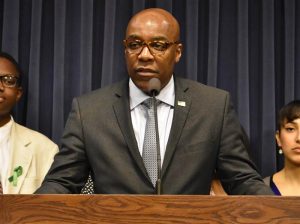 SPRINGFIELD — Illinois’ top lawyer wants a U.S. court to compel a federal official to formally acknowledge the Equal Rights Amendment received enough state support to be added to the U.S. Constitution – a largely procedural step that has thus far blocked the amendment from ratification.

Ensuring that happens, however, is not a simple matter.

The case centers on a decision by U.S. National Archivist David Ferriero, who was effectively ordered by the U.S. Department of Justice to deem passage of the Equal Rights Amendment —which would add protections for women as the 28th Amendment to the nation’s governing document — unsuccessful because multiple states missed a key congressional deadline.

Ferriero, who was appointed archivist by President Barack Obama in 2009, has since insisted that, unless a judge orders him to acknowledge the amendment’s passage, he will not do so.

When Congress introduced and passed the initiative in 1972, it set a seven-year deadline for state ratification, which was later extended to 1982. By then, only 35 states formally approved the language, five of which — South Dakota, Idaho, Kentucky, Nebraska and Tennessee — withdrew their backing in the 1970s.

In response to Ferriero’s insistence he would not officially certify the Equal Rights Amendment without a judge’s order, Illinois Democratic Attorney General Kwame Raoul, joined by his counterparts in Nevada and Virginia, filed a lawsuit in late January.

The archivist later asked a judge to dismiss the case. The attorneys general argued in a document filed Monday, June 29 that if that request is granted, the “careful balance our founders” established in the constitution between states and the federal government would be “upended.”

And “accepting the Archivist’s arguments…would do much more than simply allow an unelected Executive official to disregard his ministerial duty,” they wrote. “It would tell the women of America that, after 231 years, they must wait even longer for equal treatment under the Constitution. And it would nullify the (three states’) sovereign prerogative to ratify amendments that make our Union more perfect.”

The amendment process outlined in the constitution was drafted to “ensure federal power had limits,” according to the court document. Congress’s only role is to propose changes and choose one of two methods by which it can be ratified, not to ultimately determine whether requirements were met.

Once 38 states, or three-fourths of the union, approve an amendment, it “shall be valid…as part of the Constitution,” according to the governing document.

That “arrangement,” the attorneys general wrote, “is a critical piece of the constitutional design to which the States agreed when they ratified the constitution and consented to be bound by its terms.”

By not approving the Equal Rights Amendment’s inclusion in the constitution, Ferriero “improperly interferes” with states’ rights, according to the court filing.

The archivist, however, alleges it would be improper to allow the amendment to succeed because three of 38 states formally supported it after the deadline expired. The attorneys general argued Congress’s placement of that cutoff is important — it is in the resolution introducing the Equal Rights Amendment for state consideration, not in its actual text. Therefore, they argue, states never received formal notice of the deadline.

The three lawyers also point to the Constitution’s 27th Amendment — the last one officially passed — as an example of why the deadline is irrelevant. It specifies that Congress cannot cut or increase its salary during a lawmaker’s term in office.

That amendment was introduced by America’s first Congress more than 200 years ago. Several states ratified it in the late 1790s before it effectively died, only to be resurrected and officially adopted in 1992.

In that instance, the U.S. archivist at the time certified the initiative should be adopted “a mere 11 days after receiving official notice” that enough states support it, “without waiting for any action by Congress,” according to the court document.

The attorneys general argued that if Ferriero’s argument is successful in this case, the 27th Amendment should be declared invalid.

“Federal courts must be available to restrain a federal official from overstepping his authority in such a blatantly unconstitutional manner,” they added. “…The American people have already made the determination that sex equality should be enshrined in the constitution, and [Nevada, Illinois and Virginia] (along with 35 others) have ratified the Equal Rights Amendment that Congress proposed to do so.”

In the court document, the state’s lawyers also asked a judge to allow oral arguments to address Ferriero’s motion to dismiss their lawsuit.

The attorneys general’s request to force the archivist to act is “extraordinary,” they wrote, “but so is the archivist’s unprecedented intrusion on the constitutional authority explicitly granted to the states.”