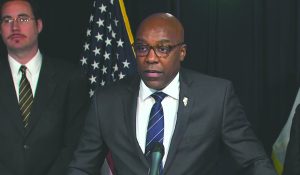 At a Chicago news conference, Raoul said “almost nobody” who signs up to receive gas or electricity from alternative energy providers ends up paying less for their energy bills than consumers who stayed with their public utility.

Raoul said Illinois customers who switched to an alternative supplier paid more than $600 million more in electricity costs over the past four years. For the average consumer who switches, the added cost is between $87 and $208 each year.

“Not everybody who is a victim of their utility rates increasing as a result of being victimized by one of these suppliers realizes this, that they’re being victimized, they’re paying increased rates,” Raoul said.

He noted that high-price energy contracts “disproportionately affect” African-American and Latino communities in Chicago on the south and west sides. Senior citizens are often targeted as well, Raoul said.

“We’ve heard from consumers all over the state who have been trapped in bad supply contracts,” Raoul said. “They routinely fail to provide customers with critical information, including price and length of contract.”

He urged the General Assembly to pass Senate Bill 651, the Home Energy Affordability Transparency, or HEAT, Act. Raoul said the bill would improve his office’s existing authority to bring suit against suppliers by enumerating acceptable and unacceptable practices for the industry so “it can be clearer and easier” for his office to “go after these bad actors.”

The bill, which is sponsored by state Sen. Kimberly Lightford, a Maywood Democrat, would also mandate alternative suppliers to provide consumers with information about rates, fees and early termination charges.

Raoul said he and predecessor Lisa Madigan have filed suit against nine of the 100-plus licensed energy suppliers in the state.

“When these ARES (alternative retail energy suppliers) enroll low-income consumers, state dollars are utilized to pad these suppliers’ profits,” Raoul said, noting the Chicago Housing Authority has banned these suppliers from marketing on its property.

The bill contains protections for LIHEAP- and PIPP-eligible consumers by preventing alternative suppliers from entering into contracts with them.

“This bill as is will take away the rights of Illinois households and small businesses to choose their energy supplier and force them back to the monopoly utility,” Teresa Ringenbach, Direct Energy’s senior manager of government and regulatory affairs, said in the statement. “Rather than shut down the entire market, the right thing to do is to make the market better with thoughtful price guardrails, same-day switching, greater transparency and stronger enforcement.”