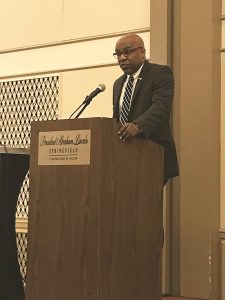 SPRINGFIELD — As Illinois residents take stock of damages caused by record floods which led to disaster proclamations being issued in 34 counties, Attorney General Kwame Raoul is urging the public to beware of scammers.

In a news release, Raoul said scammers often move quickly into communities that have experienced flood damage, using the opportunity to “pressure people into making quick and often expensive decisions about cleanup and construction work.”

“Record flooding has devastated river communities throughout Illinois, and it is critical that homeowners and business owners are on alert for scammers who will use the devastation left behind to line their pockets,” Raoul said in the release. “I encourage people to contact my office or check with the Better Business Bureau to find out whether complaints have been made against a particular contractor, and to be wary of any individual who solicits home repair or insurance adjusting services door-to-door.”

Raoul said scammers often take the form of an insurance adjuster, going door to door offering advice as to how homeowners can obtain insurance money for home repairs. However, these same “adjusters” often receive a fee from or own the home repair company they recommend, Raoul said.

Raoul said homeowners should work directly with their own insurance providers rather than anyone who knocks on their door.

Residents should ask to see the permits before entering a contract, Raoul said.

Raoul said the public should shop around and obtain written estimates from multiple contractors before making a deal, and all contract terms should be obtained in writing along with a copy of the signed contract. Residents should never make full payment until all the work has been satisfactorily completed and should never pay in cash.

Anyone entering a contract has a right to cancel it within three business days if it was signed on the contractor’s visit to their home. In the case of disaster repair, if an insurance carrier denies coverage, the homeowner can cancel the contract within five days of the denial.