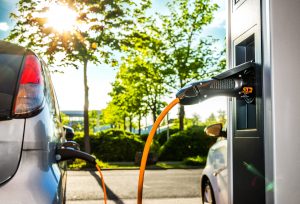 Automobile dealers in Illinois are suing the secretary of state and a pair of electric vehicle companies challenging the companies’ ability to sell their vehicles online, rather than through a dealership.

SPRINGFIELD – The Illinois Automobile Dealers Association has filed a lawsuit against Illinois Secretary of State Jesse White’s office, alleging that White is allowing unlicensed, unregulated dealers to operate in Illinois, in violation of state law.

At issue in the case is whether automobile manufacturers should be allowed to own and operate their own dealerships rather than contracting with independent dealership franchises, which has been the case in Illinois and most other states for decades.

But in recent years, there has been a growing trend of “vertical integration” within the industry, especially within the electric car industry where manufacturers like Tesla and others have insisted that they have a right to sell their own products directly to customers.

“We have no choice but to file this lawsuit, both to protect consumers as well as the hundreds of franchised dealers across the state who contribute to the local economy,” IADA President Pete Sander said in a statement. “We warned the Secretary of State’s office that consumers will be the losers if it does not enforce the laws it is required to enforce.”

Specifically, the lawsuit challenges the operations of two electric vehicle manufacturers, Rivian and Lucid Motors, which the lawsuit says are both taking online orders for sales directly to the public in Illinois.

In their complaint, filed in Cook County Circuit Court, IADA, along with several local dealer associations and numerous individual auto dealers, argue that under a decades-old Illinois law, no one is allowed to engage in the business of selling new vehicles unless they are a licensed dealer, and the only way to become a licensed dealer is to have a contract with a manufacturer establishing a franchise agreement.

The plaintiffs argue that such laws protect consumers because dealers maintain service centers that can perform required recall work and they maintain an inventory of replacement parts and provide service work. Plaintiffs also argue that dealers provide price competition within local markets and that as established businesses in their communities, they are a source of local jobs and tax revenue.

Nontraditional manufacturers like Tesla, Rivian and Lucid have come onto the market using a different business model in which they sell directly to consumers over the internet, although Tesla does operate dealerships as well.

Electric vehicle companies, including Lucid Motors, are able to sell their vehicles online, rather than through a dealership, as pictured in this screenshot. (Credit: Screenshot of lucidmotors.com)

According to the complaint, White’s office, which is responsible for administering the state’s vehicle laws, first granted Tesla permission to sell new vehicles directly to consumers in 2009. The office also granted a dealership license to Tesla founder and president Elon Musk, even though Musk owned more than 1 percent of the shares in the manufacturing company, Tesla Motors.

IADA began registering its objections with White’s office in 2012, and a lengthy chain of correspondence ensued between IADA, White’s office and Tesla Motors. By January 2017, White’s office informed Tesla that it would not issue any more dealership licenses or renew any existing ones until the company came into compliance with state laws.

Tesla, however, filed for an administrative review on that decision, and in May 2019, all the parties entered into an administrative consent order that limited Tesla to no more than 13 dealerships in the state at any one time.

While all that was happening, two new manufacturers came onto the scene – Rivian, which specializes in electric pickup trucks and has opened a manufacturing plant in the Bloomington-Normal area; and Lucid Motors, which has opened a showroom in Oak Brook and whose website indicates it is now accepting online orders for vehicles. Both companies market their vehicles directly to consumers online.

In 2020, White’s office asked for an informal legal opinion from Illinois Attorney General Kwame Raoul’s office, asking whether the state’s Motor Vehicle Franchise Act prohibits manufacturers from selling directly to consumers or whether they had to sell through franchise dealerships.

In July of that year, Raoul’s office responded, saying the act does not specifically require newly established manufacturers to sell vehicles through franchises, nor does it prohibit them from selling online directly to customers.

But IADA and the other plaintiffs challenged that conclusion, arguing that a separate law, the Illinois Vehicle Code, requires that new vehicles be sold through licensed dealerships, and the only way to become a licensed dealer is through a franchise contract.

The plaintiffs are seeking an order directing White’s office to enforce the state’s Vehicle Code and stop Rivian, Lucid and other car dealerships from directly selling vehicles in-state. They also are seeking an injunction against Rivian and Lucid to prevent the ongoing sale of vehicles to Illinoisans until a decision is reached.

“We welcome new manufacturers to Illinois, especially those who are building innovative vehicles,” David Sloan, president of the Chicago Automobile Trade Association, said in a statement. “Our franchised members already sell dozens of electric and hybrid vehicles. We ask that manufacturers sell them in Illinois according to state law. We’re not demanding they cease operations in the state, just that they franchise a dealer.”

A spokesman for Secretary White’s office declined to comment on the case Monday, saying his office had not yet been officially served with the lawsuit.