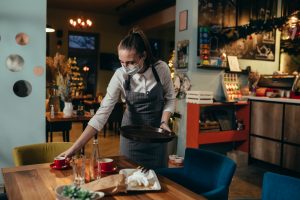 In 2019, Gov. J.B. Pritzker signed legislation into law providing a path to increase Illinois’ minimum wage rate to $15 per hour and $9 for tipped workers by 2025. Servers and bartenders who receive tips are currently subject to a $7.20 an hour minimum wage.

A bill in the Illinois House would do away with the sub-minimum wage paid to waitresses, bartenders and other tipped service workers.

Rep. Camille Lilly, D-Chicago, introduced House Bill 5139 last month. If the bill becomes law, workers who supplement their wages with tips will receive the state’s minimum wage starting on Jan. 1, 2025, in addition to their tips.

Its passage may be a tall order, however, as the Illinois Restaurant Association successfully lobbied when lawmakers overhauled the minimum wage schedule in 2019 to allow businesses to continue to pay less than minimum wage to employees who earn tips.

Lilly’s bill has currently not received a full committee assignment and has no cosponsors.

In 2019, Illinois Gov. J.B. Pritzker signed legislation into law providing a path to increase Illinois’ minimum wage rate to $15 per hour and $9 for tipped workers by 2025. Servers and bartenders who receive tips are currently subject to a $7.20 an hour minimum wage.

At a bill signing for that 2019 law, Sam Toia, president of the Restaurant Association, appeared alongside Pritzker and praised the law for maintaining the credit which allows employers to pay tipped workers 60 percent of the minimum wage if tips make up the other 40 percent.

The IRA did not respond to a request for comment as of this publication.

But Lilly, in a news conference Monday, Feb. 14 noted that Valentine’s Day is the highest grossing day of the year for restaurants, making the announcement of the effort to eliminate the sub-minimum wage in Illinois poetic.

“This work comes from the heart,” Lilly said during a Monday news conference. “This is the beginning of addressing poverty for each and every worker across the state of Illinois.”

“Two years ago, we raised the minimum wage, but we left tip workers out,” Lilly said. “This is a way to address that.” 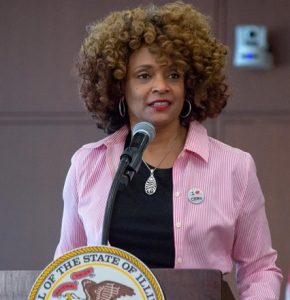 The bureau reported that a record 4.5 million Americans quit their jobs in November, but the quit rate in the hospitality and leisure industry was 6.4 percent — more than double the average of all the combined industries.

The virtual news conference on Monday was hosted by the organization One Fair Wage, based in New York.

Attendees said the hot job market led many in the hospitality industry to find higher paying jobs in other sectors.

The added challenges for restaurant workers included enforcing COVID-19 mandates, as well as exposing themselves to the virus by those who refused to comply with mitigation efforts. Also, sexual harassment is often tolerated because waitresses and bartenders depend on tips to supplement their hourly income.

In 2019, women made up 51 percent of workforce in the hospitality industry.

Tabina Gibson of Chicago worked in the hospitality industry for 20 years. Gibson, who attended the news conference with Lilly, is the mother of five and grandmother to two.

When the pandemic hit and she was laid off, she said she found she made too little in wages to collect unemployment. She used a grant and started a small business with her daughter selling lip gloss and other personal care items.

Gibson isn’t alone. In March 2020, one in four people in Illinois who lost their jobs was in the restaurant industry, but two-thirds of restaurant workers reported they couldn’t access unemployment benefits because their subminimum wage was too low to qualify for benefits.

Victor Love owns Josephine’s Southern Cooking in Chicago. He said he has challenges. His restaurant survived the pandemic and the violence that occurs in the neighborhood. Despite the challenges, Love said he supports higher wages for his employees.

One of his employees has worked for his restaurant for 30 years, Love noted. That kind of loyalty, Love said, provides stability.

“Give and it shall be given back to you,” he said.

Love’s daughter, Grace, is a waitress at her father’s restaurant. She currently gets paid $9 an hour plus tips.