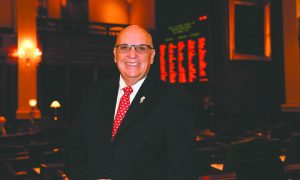 Springfield Republican Rep. Mike Murphy’s bill proposes to end the statute which allows legislators to collect a full month’s salary as long as they hold office at least part of that period. (Repmurphy.com photo)

SPRINGFIELD — A measure preventing lawmakers from receiving pay for days they did not hold office has remained in legislative limbo since its introduction in January. Its sponsor said the “simple, commonsense” fix is necessary to address the General Assembly’s “culture.”

Representatives and senators are paid in 12 equal disbursements on the last working day of each month. Currently, the statute allows legislators to collect a full month’s salary as long as they hold office at least part of that period, meaning a lawmaker can receive a full month’s pay for working just one day.

Springfield Republican Rep. Mike Murphy’s bill proposes to end that “pay benefit,” he said, and conform the legislature’s salary structure to one akin to the private sector’s.

According to his legislation, “A member who has held office any part of the month, but not for the entire month, is entitled to compensation only for those days during that month that he or she held office.”

Murphy said the resignation of former Rep. Luis Arroyo, a Democrat from Chicago, highlighted the need for his initiative.

Arroyo was arrested on federal bribery charges in late October but waited until Nov. 1 — the same day a special investigative panel was to consider whether to expel him from the chamber — to officially resign.

Because he held office for one day in November, Arroyo will be paid his legislative salary for the entire month when paychecks are issued Nov. 27, in accordance with state law, a spokesperson with the comptroller’s office confirmed.

“This is something very simple to me — if you work a day, you’ll get paid a day,” Murphy said.

His measure, proposed in January, has not been assigned to a substantive committee and cannot move through the legislative process until it does.

Murphy said he hopes “the attitude is changing” in the General Assembly to allow his initiative to receive consideration by his colleagues across the aisle when they return to the Capitol in the spring, but that he has not “seen anything to make me believe that yet.”

He added that while his bill would save “some money,” it would not be “a significant amount of money.”

“It’s more about the culture, the attitude,” Murphy said. “How are we going to perform here? Are we going to do it in an up-front, honest and commonsense way, or are we going to have special deals to question everything? To me, it’s very simple. This is what we should do.”

His bill was one of several other reform initiatives proposed by Republicans — Murphy estimated the number to be around 30 — that were not addressed by the General Assembly during the fall veto session. Lawmakers approved two bills — one creating an ethics reform commission and another requiring greater lobbyist transparency — despite Republican claims the measures were partisan and watered down.d

Chicago Democratic Rep. Gregory Harris did not respond to a request for comment by time of publication. He is the House Majority Leader and chair of the Rules Committee, which acts as a gatekeeper for legislation that passes through that chamber.

Murphy’s proposal is House Bill 818. It has six co-sponsors, all Republicans.