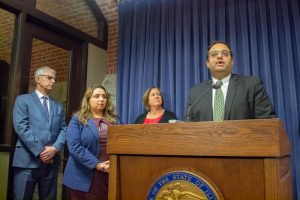 State Sen. Ram Villivalam, D-Chicago, speaks at a news conference at the Capitol in Springfield in March 2020 to argue for a policy change which he said would lower energy costs. (Capitol News Illinois file photo by Jerry Nowicki)

SPRINGFIELD – Advocates and lawmakers have reintroduced legislation that would end a special gas utility surcharge that allows companies to raise customer bills in order to pay for infrastructure development with limited regulatory oversight.

House Bill 3941, sponsored by Rep. Joyce Mason, D-Gurnee, and accompanying Senate Bill 570, sponsored by Sen. Ram Villivalam, D-Chicago, would phase out the surcharge by the end of 2021. It is otherwise not set to expire in 2023.

By ending the program, the legislation would restore traditional oversight of rate hikes. Advocates say the existing QIP charge allows for gas utility companies such as Ameren Illinois, Nicor Gas and Peoples Gas to bring in revenue at a faster pace than it would with traditional regulations.

Before QIP was implemented, utility companies would spend money on their infrastructure and have to go before regulators that would approve the spending before the utility companies could start collecting it back from customers.

Now with the surcharge in place, a company can begin collecting costs before having to justify the rate increases to regulators.

“The costs have just gone out of control,” Abe Scarr, state director of Illinois Public Interest Research Group, said. “The utilities have incentive to spend as much money as they can because it’s basically a guarantee that they’ll get it back and guaranteed profits, and they like that. So, what we’re seeing over time is these three utilities are spending way more money through this surcharge than was originally planned.”

While advocates such as PIRG claim the program allows utilities to bypass regulators, utility companies say the program pays for necessary infrastructure.

“These structural improvements facilitated by QIP are a major part of how we have been able to serve our customers through some of the most dangerous and trying periods of inclement weather over the past several years, and specifically over this past year,” Jennifer Golz, spokesperson for Nicor Gas, said in an interview.

Natural gas utilities are subject to an audit on the previous year’s spending. There’s a 4 percent cap on yearly spending and they are required to file quarterly reports of spending and other details on infrastructure development, Hall said.

“The ICC can look at the spending and reconcile what was spent with anything that they find to be unnecessary or not well spent,” Hall said. “They can literally require us to refund that money to customers. So, there is a lot of built-in oversight in the law as it exists today.”

But according to a report by PIRG, Peoples Gas, which distributes natural gas to most of the Chicago area, had some of the largest surcharges, and 29 percent of the company’s customers were behind on their bills as of January.

The 818,289 residential customers of People Gas carried more than $146 million of debt to the utility company as of January 2021, while ComEd’s more than 3.7 million customers had just $120 million in debt.

Mason introduced a similar bill in March 2020, but it stalled as the pandemic canceled most of the legislative session. Last year, she said, the General Assembly was told in 2013 by Peoples Gas that the program would cost about $1.14 per month on a consumer bill. But Scarr said at the end of 2020, Peoples Gas customers were spending close to $11 per month, nearly 10 times the predicted average, on a cost that is independent of the customer’s energy use.

Advocates of the new bill are concerned that Peoples Gas is not actually spending that money on safety measures and instead using this program for a “huge system overhaul.”

Unlike Ameren and Nicor who have already replaced all of their cast iron pipe, Scarr said Peoples Gas is far behind in replacing old pipes.

“One of the main safety issues that this (surcharge) was supposed to be about is replacing old cast iron and ductile iron, that’s kind of old pipe material that’s relatively brittle and will fail, which can cause all different types of problems,” Scarr said. “Peoples Gas still has a lot of that left in its system.”

David Schwartz, another spokesperson for Peoples Gas, said that the QIP charge is essential to ensuring these pipes get replaced.

“Look at what happened in Texas last month because of underinvestment in natural gas infrastructure,” Schwartz said. “We have pipes in service that are antiquated and deteriorating and are at the very end of their lifespans, some are from the 1800s, we cannot ignore that.”

In early March, about 1,300 Peoples Gas customers in Logan Square in Chicago were without heat for a few days as main gas lines that were more than 100 years old stopped working.

A newly released PIRG analysis of data from reports the utilities file with state regulators  shows that Logan Square ranks 10th out of all neighborhoods under Peoples Gas for the number of gas main breaks or cracks from 1981 through 2018.

“Despite these indications of relatively high risk, Peoples Gas is not planning to conduct its pipe-replacement program in the neighborhood until 2032-2036,” according to the coalition’s news release.

Schwartz said the company has other high-risk neighborhoods as well.

“The reason we haven’t gotten to it yet is because there’s so many other neighborhoods, 82 of them with a higher risk factor, a higher level of urgency,” Schwartz said. “That doesn’t mean that Logan Square is not urgent. They’re criticizing us for doing the program they want to get rid of and then they’re saying, ‘hey, hurry up, move faster on the program.’”