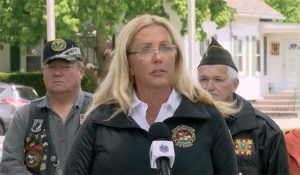 Sen. Sue Rezin, R-Morris, stands with local veterans on Monday, May 10 in front of the LaSalle Veterans’ Home to discuss legislation that seeks to address the failures documented at the LaSalle home during a deadly COVID-19 outbreak in November. (Blueroomstream.com)

The legislation was prompted by an investigation into the COVID-19 outbreak last year at the LaSalle home that killed 36 veterans.

The former director of the Illinois Department of Veterans’ Affairs, Linda Chapa LaVia, and the former LaSalle home administrator, Angela Mehlbrech, both declined to be interviewed for the investigative report compiled last month by the state Department of Human Services’ inspector general.

Chapa LaVia, who resigned, and Mehlbrech, who was fired, left their respective positions in the aftermath of the deadly outbreak at LaSalle.

“How could the former director of the Department of Veterans’ Affairs and the head of the veterans home refuse to answer any questions about the outbreak that costs the lives of 36 veterans?” Rezin said May 10 during a news conference at the LaSalle home. “When I asked that question, I was told the inspector general does not have the power to compel former directors and employees to testify. After learning this, I was outraged.”

Rezin said she filed Senate Bill 1445 in response to the decisions by Chapa LaVia and Mehlbrech to not cooperate with the investigation by the DHS’ inspector general.

The bill allows agency inspectors general to subpoena a former state employee in the course of an investigation undertaken to “correct a systemic issue, problem, or deficiency,” according to the bill.

It defines former employee as “a former agency director, senior administrator or any other individual who had the authority to implement policy action for the department, an agency under contract with the department or any facility or program operated for or licensed or funded by the department.”

The DHS inspector general’s report found that the home lacked infection prevention plans or policies before the pandemic hit in March 2020.

The report also found the home failed to maintain effective communication among staff, as well as failures to properly train and educate staff at the LaSalle home. In addition, the report found a repeated lack of compliance with personal protective equipment protocols.

Mehlbrech contributed to the ineffective communication and lack of training, according to the report, which noted she initially held brief meetings one to three times daily to inform the staff of the changing policies within the home.

But these meetings did not contain in-service training and they stopped entirely during the summer. In addition, the report states, Mehlbrech did not hold any meetings with nurses.

Mehlbrech was “rarely seen at the home and often remained in her office,” according to the report.

When Mehlbrech’s interim replacement, Anthony Vaughn, arrived, one staff member told him, “I’m glad you’re here, because I haven’t talked to Angela in six months,” according to the report.

Witnesses interviewed for the report described Chapa LaVia as “not a hands-on or engaged day-to-day Director.” They also said that her chief of staff, Tony Kolbeck, managed the agency and handled the day-to-day operations. Kolbeck has also since resigned from the department.

Chapa LaVia, who is a former state representative and an Illinois Army National Guard veteran, told investigators that she would consider sitting for an interview with the inspector general if she received questions in advance.

The inspector general’s team declined to provide Chapa LaVia with questions in advance, and she was not interviewed.

Gov. J.B. Pritzker, who appointed Chapa LaVia in 2019, said he hired her to lead the IDVA because of her role in investigating the deadly outbreak of Legionnaires’ disease at the Quincy Veterans’ Home. But he admitted during a news conference on April 30 that if he knew then what he knows now, he would not have hired her.

In addition to SB 1445, Rezin has introduced a bill that would require facilities licensed and operated by the state to conduct outbreak preparedness drills, and a separate bill to require an IDPH onsite visit within one business day of an infectious outbreak at a veterans home.

Those bills would codify recommendations made in a 2019 audit of the Quincy Legionnaires’ disease outbreak that killed 13 veterans.

Rep. David Welter, a Morris Republican who also represents the LaSalle home, passed a House Resolution by a vote of 111-0 that calls on the Illinois Auditor General to conduct a separate investigation of the deadly LaSalle outbreak. The auditor general’s office also investigated state’s handling of the Quincy outbreak.

A representative from the auditor general’s office confirmed that the office plans to conduct an audit based on the request contained in Welter’s house resolution.