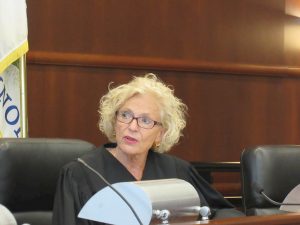 SPRINGFIELD — Since the state’s highest court began meeting 200 years ago, 121 justices have served as its leader. Three of those are women.

She earned her legal degree from Chicago-Kent College of Law at the Illinois Institute of Technology in 1983, when she was 39, after working as a physical education teacher and helping found the Chicago Special Olympics.

Gov. James Thompson appointed Burke to the Illinois Court of Claims, making her the first woman to sit on that bench. She spent seven years there, 11 on the appellate court and served as the head of a board that investigated sexual abuse in the Catholic Church.

Burke first joined the high court in 2006, when she was appointed to replace its first woman to serve as the head of any of Illinois’ three branches of government, former Chief Justice Mary Ann McMorrow.

Justice Rita Garman is the second woman to serve on the Supreme Court. She became chief in 2013, and is still on the bench.

With her election to the head of the court by her colleagues, Burke became the first chief justice in almost a decade from Cook County.

The following is an interview, edited for length and clarity, with Burke in the library of the Illinois Supreme Court in Springfield. While Burke touched on several topics in the broad-ranging interview, she declined comment when asked about the federal indictment on racketeering and bribery charges of her husband, Chicago Alderman Ed Burke.

Be sure to listen to this week’s episode of Capitol Cast for more.

Capitol News Illinois: I was interested in speaking with you because, not that being a woman defines you, but you are only the third female to hold this position out of 121.

Are you surprised that you’re only the third?

Well, I was surprised that there wasn’t somebody before Justice McMorrow. I mean, her history alone; … She was the only woman in her law school class in the ‘50s. She was the first woman to try a felony murder trial. She was preparing for an argument in the Illinois Supreme Court, and her boss asked her what she was doing — she was in the state’s attorney’s office — and she says, “Well I’m getting ready for oral argument.” He said, “Oh, no, women do not argue in the Supreme Court.” She was totally denied [the opportunity to argue her case in the Illinois Supreme Court]. And this is the ‘50s. I was already born, you know what I mean? And then, of course, she ran for the Supreme Court, ultimately won, and became the first woman justice — in the ’90s. How could that be in the world today? … You’re always the wife of somebody or you’re always something like that. So I mean, it’s not unusual.

You’ve done so many other things. You have 13 honorary degrees, you’ve taught education, you helped found the Chicago Special Olympics, you served on the board of admission to the Bar. What do you bring to this position that perhaps some of your predecessors may not have?

I’m a gatherer. I’m a convener of people and not doing it necessarily myself but having everybody else involved — every team member is important, not one over the other. And I think that’s exactly the way our court has functioned, which is not because of me necessarily, but just by the nature of everybody is a Supreme Court judge. We don’t have one extra vote because you’re chief — you just have to do the agenda and open court and some other things. But outside of that we’re equal. And that’s, I think, the team approach that I’ve taken my whole life. So hopefully I can consider that as something that I do in my everyday life on the court with committees and other kinds of activities that we participate in.

I do. … I didn’t go to law school until I had four children under 10. … People should go when they feel like it. But on the other hand, I always try to tell young people, don’t dream about being over there. Dream about enjoying what you’re doing today. Everything I’ve done, I’ve enjoyed at that moment and that built on to where I am today. I never had the goal to be a lawyer or a judge, or even a teacher. It just evolved that way and I enjoyed every second of it.

You might say that I wouldn’t be who I was today without having the dreams at every point in my life. The dreams were to be, enjoy what you’re doing — every second. Then you get the chance to see the windows and the doors that open up along the way. If you’re so focused ahead of yourself, you never see what’s available on either side, or who might influence you…

So that’s what I tell young people — just enjoy today. Prepare yourself, of course. Go to school — enjoy what you’re doing in school and experiment with different things. Take that risk. Martin Luther King always said, “You never know what’s at the top of the staircase. But if you don’t take that first step you never will.” 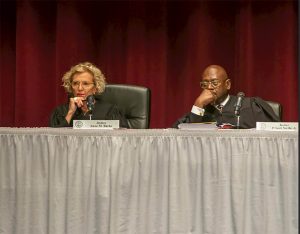 Illinois Supreme Court Justices Anne Burke (left) and P. Scott Neville Jr. hear oral arguments during a public session Sept. 18 on the campus of Lewis and Clark Community College in Godfrey. The annual event is an opportunity for students and other members of the public to see how the state’s highest court operates. (Illinois Supreme Court on Flckr photo)

Part of your initiative as chief justice is going to be the listening tour, … as I understand it, increasing access to justice in the state. Could you tell us a little bit more about that?

Well, first of all, I think I really got the idea of the Listening Tour from the Latin term that’s … in the Supreme Court room both in Chicago and here, audi alteram partem — to hear the other side. It’s a mandate to all the justices every time we come on the bench. … I think I’ve taken it personally to listen to my children more, you know, [and] my husband maybe, maybe not so much. But needless to say, it’s good to listen to other people.

And I’ve just returned from several different conferences around the country — one on mental health and one on juvenile justice. Everybody has such a wealth of information, you can’t help but learn from that. And so I thought that perhaps it would be good for me to travel around the state and just listen to what’s going on. The hope is the Illinois State Bar Association will be my host and they will take me to the different places and invite … all the stakeholders in our justice system. So it will be the sheriff, it will be the clerks and it will be the judges and the lawyers, but also anyone else who’s an integral part — public defenders, state’s attorneys — should be in the room, and I want to hear what they have to say.

There’s not so much difference between what we do in different circuits. Cook may have more people, but it isn’t necessarily what they do is different than anything in Macon County for sure. It’s just that there’s a volume there. But there’s so many things that people might do just a little bit different that we can all learn from. And that’s what I want to do, is try to gather all that information, come back and look at it, and try to work with it with our Access to Justice and our new initiative for the court, and use what people have thought nobody is listening to. I want to listen to them.

Justice Karmeier had said that one of the things that will define his legacy as chief justice is the success of the Strategic Agenda, which of course is something that you will be heading.

That’s a lot of pressure. Yes, he told me that too. I know. Well, I’m going to do everything in my power and then everyone else is on the court — we all are a team, like I said. [Justice Karmeier] says that kiddingly because he knows that each one of us, all seven of us, will do everything we can. We’re going to spread out and try to get it all done.

Three years from now, … somebody will ask you what you think your legacy will be. Is there something you hope to be able to say to them, or is this something you haven’t even begun to think about yet?

No, I really don’t think I’m thinking about any legacy because I just want to meet people and I want people to be engaged in the law and, actually the delivery of the law to the public. And if that occurs, in one or two places that it hasn’t been, then that’ll be wonderful. But I’m not going to be doing it. It’s the individuals everywhere around the state that will actually be doing it. I just want to be the cheerleader and tell them to go ahead and do it. …

We don’t have an opportunity very often to encourage people and thank them for their service and give them a pat on the back to say,…try what you want to do, what you like to do, what you think might work. If it doesn’t, OK, don’t go forward with that, try something else. That’s really what I want to do and I want others to follow with that, within the circuit — continue meeting and being a collaborative team. … We’re going to have lots of teams. Twenty-four circuits in the state, 24 more teams around the state to work on things.

Well as you opened with, it’s the highest honor that anybody could ever have. The fact that I am a woman, and not really an academic, and dyslexic — how did I ever get here is my question. How could that be? But it did happen, and the nice thing about our court, one of the many nice things, is that we are geographically diverse but … our state Constitution provides how we can have people from everywhere in the state come together and work together because we have the same interest — and that’s improving the law in Illinois and delivering justice.