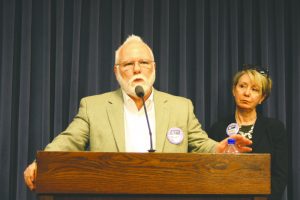 Barry Gregory, who along with his wife Patti (also pictured) owns Crehan’s Irish Pub in Belleville, said video gambling revenue helped his business come back after losing profits and customers when smoking was banned in public places in Illinois. Gregory joined several small business owners at a news conference Wednesday in Springfield to voice their opposition to a proposal to raise the tax paid by companies that own and operate video gambling machines. (Photo by Grant Morgan/Capitol News Illinois)

SPRINGFIELD — Randy Rehmer, owner of Waterloo’s Double R Bar just south of East St. Louis, says raising taxes on video gambling will eat at the $70,000 he makes each year off the machines alone.

Besides bringing more customers to his business, Rehmer says video gambling revenue has helped him remodel the building, hire an extra employee and give his staff pay raises.

“I’ve got nothing against raising the minimum wage,” Rehmer said. “But the state is telling me to pay people more at the same time that it takes money away.”

Rehmer joined several other small business owners at a news conference Wednesday morning May 8. He was referring to a possible tax increase on video gambling terminals, which show up in almost 7,000 local establishments across the state.

While no legislation has been introduced, a tax increase has the backing of Gov. J.B. Pritzker, who first mentioned it in his late-February budget address.

Companies that own and operate terminals pay a 30 percent tax on video gambling revenue. The remaining money is then split, with half going to the retailer and half to the operator.

Casinos have a graduated tax rate, with rates starting at 15 percent and rising to 50 percent depending on how much money is made.

In the most recent numbers available from a report by the Commission on Government Forecasting and Accountability, taxes on video gaming brought in $351.6 million compared to $311.8 million from taxes on casinos in Fiscal Year 2018.

Local governments, on the other hand, received about $10 million more from casino taxes than video gaming taxes – $80.5 million compared to $70.3 million.

Racetracks, taxed at 11 percent, brought in a much smaller $12.6 million to both state and local governments in calendar year 2017, the latest numbers available.