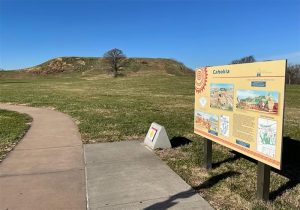 There’s a new way to explore an ancient place in Illinois.

Visitors of Cahokia Mounds State Historic Site can try experiencing it in “augmented reality,” or AR, to see the Grand Plaza as it appeared 1,000 years ago, the Palisade as it once stood and the exterior and interior of the temple that once stood atop Monks Mound.

Cahokia Mounds was the central hub and largest city built by the Mississippian culture of Native Americans. The site has been recognized as a National Historic Landmark, an Illinois State Historic Site and a World Heritage Site by the United Nations.

At its height, Cahokia stretched over six square miles and was home to 10,000 to 20,000 people. Set near the Mississippi River, Cahokia was a trade hub and an agriculture production site. There were 120 mounds in Cahokia, including the largest, Monks Mound. The Mississippians built them between 900 and 1400 AD, according to archeologists.

The augmented reality tour unveiling comes as there is a renewed push to make the site a part of the federal National Park System.

Illinois’ U.S. senators Dick Durbin and Tammy Duckworth, both Democrats, sent a letter to President Joe Biden Tuesday, Nov. 30 asking him to incorporate Cahokia Mounds into the National Park System. In 2016, a study found that Cahokia Mounds met all four of the criteria — significance, suitability, feasibility, and need for National Park Service management.

“We write to encourage you to use your authority under the Antiquities Act to designate the Cahokia Mounds State Historic Site as a unit of the National Park System,” Duckworth and Durbin wrote in the letter to Biden. “We support elevating, protecting, and sharing this important archeological and cultural resource that represents the people and landscapes that once made up one of America’s first cities in the Western Hemisphere.”

Visitors can experience the site in augmented reality by downloading the app at a cost of $4.99 to their Apple device, or they can rent an iPad for $15 at the site. Developers spent five years creating the new application that allows visitors to step back and experience Cahokia as it once was.

“Once the app is downloaded to your device, visit Cahokia Mounds and begin your tour at the Monks Mound parking lot where the first ‘Waypoint’ can be found,” Cahokia Mounds site superintendent Lori Belknap said in a news release. “These Waypoints are unique images mounted to concrete blocks and will launch the app once scanned.”

The Cahokia AR Tour application was developed and produced by the Cahokia Mounds Museum Society and Schwartz and Associates Creative of St. Louis and was funded by two grants from the National Endowment for the Humanities.