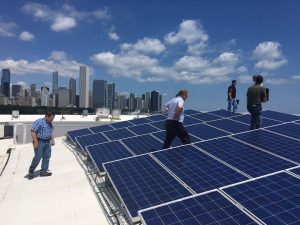 House Bill 804, otherwise known as the Clean Energy Jobs Act, or CEJA, would put Illinois on track to 100 percent renewable energy by 2050.

SPRINGFIELD – The Illinois House Energy and Environment Committee advanced a pair of energy bills that would overhaul the state’s energy industry to the House floor Monday, March 15.

House Bill 804, otherwise known as the Clean Energy Jobs Act, or CEJA, would put Illinois on track to 100 percent renewable energy by 2050. House Bill 2640, known as the Path to 100 Act, also passed the committee Monday night. It would increase the cap on energy bills from about 2 to 4 percent to provide funding for renewable projects, avoiding what its advocates call the “solar cliff.”

Sponsored by Rep. Ann Williams, D-Chicago, CEJA would increase development of renewable energy sources, such as wind turbines and solar power, commit Illinois to cutting carbon from the power sector by 2030, reduce pollution from gas and diesel vehicles by electrifying the transportation sector, and create jobs and economic opportunity across the state, according to sponsors.

Both bills moved out of committee on 18-11 votes after hours of discussion on Monday.

Opponents of CEJA said they are ready for the transition to clean energy, but are concerned about the reliability and affordability for utility companies and customers if CEJA becomes law.

Williams said she is committed to working with the opposition before bringing the bill back to committee with amendments. In the previous General Assembly, lawmakers considered folding CEJA, the Path to 100 and other energy legislation into a massive energy regulation omnibus bill.

“It’s definitely an ongoing conversation, and we need to work closely with our partners in organized labor and other stakeholders to reach consensus… I feel very positive about the momentum that the fight for clean energy gained last night,” Williams said in an interview.

CEJA had 1,510 proponents and 118 opponents listed on the state’s website, and a panel of 12 witnesses presented testimony at the hearing.

The bill would create Clean Jobs Workforce Hubs, which the Illinois Clean Jobs Coalition describes as a network of frontline organizations that provide direct and sustained support for minority and disadvantaged communities, including job opportunities.

CEJA was crafted with a focus on equity aimed to tackle climate change concerns while also addressing social and environmental injustices in Illinois, she said. Lawmakers also had a joint committee hearing with the Economic Justice and Equity Committee scheduled this week to discuss diversity, equity and inclusion within CEJA. 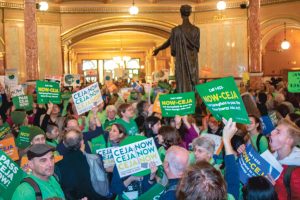 Renewable energy advocates rally Oct. 29, 2019 at the state Capitol in Springfield for the passage of the Clean Energy Jobs Act. The measure stalled in the Statehouse amid federal investigations of energy giant Exelon. (Capitol News Illinois file photo)

“We don’t just want electric vehicle charging stations, rooftop and community solar, and energy efficiency projects completed in Black neighborhoods and communities. We want Black workers installing them, and we want Black-owned businesses designing the projects and getting them built,” said the Rev. Tony Pierce, Board President of Illinois People’s Action, who testified March 15.

“CEJA is the only comprehensive energy bill that delivers on that promise, and after the devastating effects of the pandemic, we need these good-paying jobs now more than ever,” he said.

Illinois’ energy grid is part of a multistate transmission entity. Northern Illinois is part of PJM Interconnection, a regional transmission organization, and the rest of the state is part of the Midcontinent Independent System Operator, or MISO.

Those organizations procure energy and capacity, which means that the power generators are paid in advance to ensure that the energy capacity will be available when it’s needed at peak usage times for years in advance.

CEJA would include fixed resource requirements, which means that instead of relying on the regional market for capacity procurement, Illinois would have its own state procurement process for the PJM territory. The bill would not pull the state from that grid, but would remove it from the multistate capacity procurement auction to allow the state more authority in setting its own energy procurement goals.

Patrick Evans with the Illinois Energy Association said he questions whether the bill will actually achieve what it is trying to achieve. Evans said he has concerns about the rate impact and an emissions fee included in the bill.

Many of CEJA’s programs are funded through fees placed on carbon-emitting energy sources. That includes fees paid quarterly by fossil fuel emitters based on the share of carbon they emit. That money would go to the Energy Community Reinvestment Fund to pay for the various aspects of the bill, with a revenue goal of $400 million annually through 2025.

“We can’t find a plant that would be able to pay the fee and be a viable business in Illinois,” Evans said. “We don’t believe that fee will be paid. The power plants will opt to close.”

“This is a reasonable way to ask the polluters to pay, not the ratepayers, and by shifting the burden from the ratepayers, to the generators that actually emit carbon pollution into the air,” Williams said.

Jim Blessing, vice president of regulatory policy and energy supply for Ameren Illinois, said he is concerned about the impact of the bill on downstate rates, noting that losing every fossil fuel plant in Illinois would further reduce baseload energy production, or the amount of power that can be supplied to the grid at any given time.

“While this may not be a concern in the northeastern Illinois area, it would lead to downstate being very short of meeting capacity obligations and cause the price of energy to skyrocket,” Blessing said.

Based on an analysis done by Ameren Illinois, Blessing said CEJA would add $19.2 billion to downstate customer bills over the next 30 years.

“This is on top of what our customers are already paying into the current policy,” Blessing said. “It will cost the average downstate family $24 more on their monthly energy bills.”

Williams said she is willing to continue discussions to address the opposition’s concerns, but still believes it is urgent to pass a comprehensive energy bill this session.

“I think CEJA is the bill that will accomplish all of our clean energy goals, including addressing the climate crisis, bringing jobs and economic development to underserved communities. And, of course, finally putting an end to the backroom deals and profit driven energy policies of the past,” Williams said.