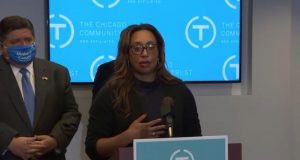 SPRINGFIELD — Some lawmakers and stakeholders are asking Gov. J.B. Pritzker to hold off awarding 75 marijuana dispensary licenses amid concerns that just 21 applicants qualified for the first round of licenses.

Applicants for licenses were graded on a 250-point scale established by the Illinois Department of Financial and Professional Regulation to determine which firm receives a license. The applications were scored by an unaffiliated third-party, KPMG, a private auditing firm. KPMG was paid $4.2 million by IDFPR to grade the applications, a process that was delayed by five month amid the coronavirus pandemic.

Because each of those 21 applicants achieved a perfect score, the 75 licenses are to be distributed via lottery. In an email sent Tuesday, Sept. 8, a spokesman for IDFPR, which oversees the marijuana dispensary licensing process, said the lottery would take place in late September.

“The worst thing you can do is to keep digging a deeper hole. I would like to suggest to (Gov. Pritzker) to step up and put the social equity licenses on hold. KPMG and others screwed up. Stop this mess!!!” state Rep. Emanuel “Chris” Welch wrote on Twitter two days after the winning firms were announced.

Welch sent a letter to Pritzker in July, asking that he delay the licensing process to add additional safeguards and make sure it was equitable.

On Monday, Sept. 7, the Illinois Legislative Latino Caucus and the Illinois Legislative Black Caucus both sent letters to the governor asking that he suspend the lottery from taking place and provide legislators more information about the process. Requests include a more detailed explanation of the scoring methodology, an explanation for why KPMG received a no-bid contract to conduct application reviews, and for the applications of the top scorers to be made publicly available on the IDFPR website.

“My constituents have been contacting me and expressing their concern that the African American community got left behind again by a system that benefits rich insiders,” Ford said. “There must be transparency and all questions need to be answered.”

“We were anticipating some really great results that we could hold up to the rest of the nation,” Willis said during that town hall. “We did not see that, we did not see this social equity piece come into play that so many of us that voted for this because of that aspect wanted… And we’re questioning that.”

Pritzker and his senior marijuana advisor Toi Hutchinson addressed concerns about the process on Sept. 8 but rejected calls to halt distribution of the 75 licenses.

“There will be changes and fixes along the way,” Pritzker said. “The social equity focus of the cannabis industry, and how it was created, this is a marathon, it’s not a sprint.”

The governor noted that there are over 300 more licenses to be given out by the state, and he was open to changes to the process in how those would be distributed. According to Pritzker, about two-thirds of the successful applicants were firms owned primarily by people of color.

“When we’re done with this process, we will have the largest percentage ownership by people of color anywhere in the nation.”

Hutchinson said disappointment in the first round is due to the fact that 4,500 applications were submitted between 700 applicants, with only 343 applications from the 21 selected applicants making the cut. All 21 applicants achieved social equity status under the guidelines established by the IPFPR, and over 60 percent of all applications had that designation.

Two applicants who were not approved to received dispensary licenses are currently suing the state to stop the lottery from taking place, according to the Chicago Tribune.