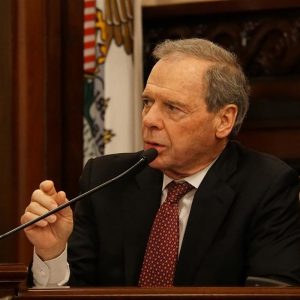 SPRINGFIELD — The outgoing leader of Illinois’ Senate offered a piece of advice for whoever next assumes the position — “bring everyone together.”

Chicago Democrat John Cullerton surprised his colleagues in November when he announced his intention to resign from the General Assembly. He spent almost 40 years as a lawmaker, first serving in the House before moving to the Senate, where he was elected president in 2009.

Senators were expected to choose the chamber’s new president in an election Sunday, ending what Cullerton called the “very humbling experience” of campaigning for votes. That sentiment, he added, has been expressed by “everybody who has ever gone through this process.”

“Everybody is equal. Everybody has the same ranking. You’re asking your peers to elevate you to this powerful position, and you’re reminded of your shortcomings by your colleagues,” Cullerton said in an interview reflecting on the previous session. “You have to win them over. That’s where the humility comes in.”

Cullerton said he is “staying out of the race.” By abstaining from the vote, he ensures he will “be friends with my successor for sure” and no one can accuse him of working “against or for anybody.”

Once the chamber’s new leader is chosen, Cullerton said that person must heal any division within the party so the successes of the previous session can be continued.

“I spent more time trying to accommodate the people who wouldn’t vote for me so everybody felt like they were on the same team. It can be bitter,” he said. “Whoever wins, though, they have to really work to bring people together.”

The vote is a “personal” one — senators want to know what a potential new leader can bring to the caucus and chamber in terms of initiatives and ideas.

And when a Senate president contest occurs at the opening of a new General Assembly, lawmakers inquire whether they are under consideration for a paid committee chairperson or leadership position. Because this vote is in the middle of a two-year session, Cullerton said he speculates the current posts will not change.

“Once you do that,” he continued, “please reach out to the other side. When you have a supermajority, you have nothing to lose to talk to the Republicans.”

The minority party will not make “unreasonable demands” because its members know they do not have enough votes to be successful. And collaboration will result in “a better work product.”

Cullerton cited the Grand Bargain he worked on with former minority leader Christine Radogno — a package of major legislation including an income tax increase and workers compensation reform — that helped both parties during the budget impasse years under former Republican Gov. Bruce Rauner.

“You have to, if you do it like I did, focus on making sure everyone is on the same page. It’s a very challenging, time-consuming and rewarding job,” he said. “And it’s not about the amount of money you can raise.”