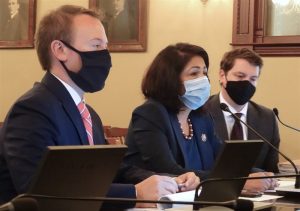 Rep. Lisa Hernandez, center, a Cicero Democrat and chair of the House Redistricting Committee, presents a new version of legislative maps Tuesday ahead of an expected Tuesday evening vote on the maps. (Capitol News Illinois photo by Peter Hancock)

SPRINGFIELD – Democrats in the General Assembly pushed through a new set of legislative maps  during a one-day special session Tuesday, Aug. 31 although the process they used sparked the ire of Republicans and voting rights advocates alike.

If accepted by Gov. J.B. Pritzker, as they are expected to be, the new maps would replace those adopted in May, which were passed without the benefit of official 2020 U.S. Census data. But they will also have to pass muster with a federal court, where two lawsuits are pending, and possibly the Illinois Supreme Court.

The plan adopted Tuesday night was actually the third draft of a redistricting plan that had been introduced in the span of less than 48 hours. The first was formally released Monday afternoon and was the subject of a contentious public hearing that night.

A second, amended version was introduced Tuesday morning, barely one hour before the start of a hearing in the House Redistricting Committee, and that plan was changed slightly again just before the House came into session to debate the package.

“I’m just going to reiterate what I’ve been hearing from thousands of people over the last several months. We need at least 30 days to review this map,” the Rev. Robin Hood, of the Chicago-based United Congress of Community and Religious Organizations, or UCCRO, said during a Tuesday morning hearing. “It would be unfair to us if we didn’t have the time to get the map out to all our people and make a decision based on expedience.”

Hood and other advocates testified virtually during a hearing that was originally scheduled for 10 a.m., but which had to be postponed because the bill containing the new proposal, House Amendment 2 to Senate Bill 927, wasn’t released until just minutes before that time.

The committee also heard from representatives of the Chicago Lawyers’ Committee for Civil Rights and the Decalogue Society of Lawyers, a group that advocates for Jewish communities in Illinois, both of which urged lawmakers to allow more time for the public to review the latest proposal.

The bulk of the 1,269-page bill is made up of lists of census block numbers, townships, wards and precincts that define each proposed House and Senate district. It was accompanied by a separate resolution explaining how the districts were drawn.

The Tuesday morning hearing followed one held Monday evening, during which several advocacy groups complained about getting short notice of the meeting and little time to review the proposal.

Common Cause Illinois, a political reform advocacy group, issued a statement Monday afternoon saying it would boycott the hearing out of protest for the way in which lawmakers were conducting the redistricting process.

“Since the beginning, we’ve pleaded with lawmakers to keep the redistricting process open, transparent, and accessible to no avail,” the group’s executive director, Jay Young, said in a statement. “This latest, last-minute hearing provides almost no notice to the public. The new maps will be released less than a day before lawmakers vote on them. It’s shameful, and our organization refuses to add any legitimacy to such an undemocratic process.”

But State Rep. Lisa Hernandez, D-Cicero, who chaired the House committee, defended the process during debate on the House floor.

“The House and Senate Democrats worked tirelessly to bring stakeholders and communities from across the state together for their input,” she said. “Fifty hearings in the spring, nine hearings this August, multiple ways to testify and submit recommendations, a public mapping portal to submit maps. Did everyone get everything they wanted? No. But everyone was heard. Redistricting is a complex exercise with many competing interests and priorities.”

Republicans, however, complained that the web portal Democrats had set up to allow people to submit their own proposals actually didn’t work and many individuals were unable to use it. They also complained that the final maps brought to the floor did not reflect the concerns that many communities had raised, but instead were drawn to protect the political interests of the Democratic majorities.

“We’ve had members say what a great process this has been, because we’ve had so many different hearings,” said Rep. Ryan Spain, R-Peoria. “These are hearings that have included locked doors, and no one showing up at all, other than our dedicated Republican spokesperson, and other members of the Republican side of the aisle. This is not transparency. This is not legitimate outreach. It’s not earnest involvement of constituents.”

Ultimately, though, the new redistricting plan passed both chambers strictly along party lines – 73-43 in the House; 40-17 in the Senate.

Afterwards, the reform advocacy group CHANGE Illinois, which has long advocated for an independent redistricting commission to redraw maps every 10 years, issued a statement condemning the process.

“Drawing district maps in locked back rooms yet again, Illinois lawmakers underscored their utter disregard for the will of the people and for the bedrock democratic principles of open government by and for the people,” the group’s executive director, Madeleine Doubek, said in a statement. “Gov. Pritzker said he wanted maps that reflect the state’s rich diversity. These maps fall far short of that request and should be rejected by him. Failing that, we hope the courts will force the correction of lawmakers’ callous political mapping calculations.”

Democratic leaders had called the special session shortly after the Aug. 12 release of official, detailed data from the 2020 U.S. Census that showed the maps they approved in May, and which Pritzker signed into law, were significantly out of balance and would likely be held unconstitutional.

Two federal lawsuits were filed challenging those maps – one by legislative Republican leaders, and another by the Mexican American Legal Defense and Educational Fund, or MALDEF. Those cases are before a three-judge panel in federal court in Chicago, which has scheduled a status hearing for Wednesday, Sept. 1, to be briefed on whatever changes are made during the special session.

Lawmakers crafted the earlier maps using population estimates from the Census Bureau’s American Community Survey, arguing that it was the “best data available at the time.” It also enabled Democrats to argue that they met the June 30 deadline in the Illinois Constitution for the legislature to approve new maps, thus avoiding sending the work to a bipartisan commission where Republicans would have a 50-50 chance of controlling the process.

Republicans, however, argue that the maps approved in May were unconstitutional and, therefore, not “effective” by June 30, and they are seeking to force the appointment of a bipartisan commission.