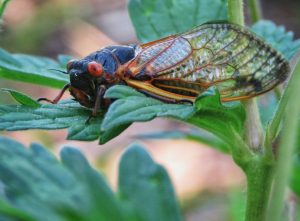 You’ve probably heard the buzz — pun intended — that it’s going to be a noisy summer across much of the country, with 17-year cicadas expected to emerge across 15 states, including Illinois.

While the reports are true, you can rest easy if you were concerned about the cicadas disturbing your peaceful summer. You’ve got a few more years of peace and quiet before 17-year cicadas loudly make their presence known across Will County and northern Illinois in 2024.

The 17-year cicadas that will emerge this summer are part of what is known as Brood X, the extension reports. Brood X includes cicadas living in 15 states. In Illinois, Brood X cicadas are found in only a small part of the east-central part of the state bordering Indiana. Other states where Brood X cicadas will emerge this summer include Indiana, Ohio, Kentucky, Michigan and Pennsylvania.

The cicadas in northern Illinois are part of Brood XIII, which last emerged to much fanfare in 2007 and will do so again in 2024, according to the extension. Brood XIII cicadas live in the northern half of Illinois and parts of eastern Iowa, southern Wisconsin and southwestern Michigan.

Northern Illinois is also home to a sub-brood of 17-year cicadas known as Marlatt’s X, and these are the cicadas that made a bunch of racket last summer. If the past is any indication, though, the cicada emergence in 2024 will be more spectacular than last summer’s.

Brood XIII has a reputation for being the largest emergence anywhere, according to the University of Illinois Extension. In their emergence in 1990, there were reports of people in the Chicago area having to shovel sidewalks of dead cicadas because they had piled up in such large quantities.

The 13-year and 17-year cicadas are called periodical cicadas, and they are one of two kinds of the insect that live in Illinois. Every summer we see the emergence of dog day cicadas, also called annual cicadas. Like their periodical counterparts, dog day cicadas also have life cycles that last multiple years — typically between two to eight years depending on the particular species — but their life cycles are not synchronized, so some emerge each year rather than all in the same year, making their arrival less noticeable. Dog day cicadas typically emerge from underground between July and September, according to the Morton Arboretum.

All the time underground isn’t spent in dormancy. The cicadas remain active, tunneling through the soil and feeding on roots from plants and trees. While their presence isn’t noticeable while living underground, that changes in a big — and loud — way once they emerge.

That loud buzzing sound we associate with cicadas is an important part of their life cycle, because it is how the males attract female mates, according to National Geographic. And while the buzz of cicadas may just sound like a big racket to you, each species of cicada has its own call, and the insects can differentiate between them.

So how do small insects create such a big racket? The males have an organ called a tymbal that produces sound. The tymbal has a series of ribs that can buckle onto one another when the cicada flexes its muscles, the Peggy Notebaert Nature Museum reports. As each rib buckles, it creates a clicking noise, and the combined effect of the clicks is the buzzing sound we are all too familiar with.

Cicadas are often mistakenly referred to as locusts, but the terms are not interchangeable. Locusts are actually a type of grasshopper, while cicadas are unrelated to grasshoppers. Both locusts and cicadas do emerge in masses, but cicadas are not typically destructive, while locusts can eat all of the vegetation in their path, National Geographic reports.

Among their environmental benefits, cicadas serve as a perennial food source for their many predators and the nymphs help to aerate the soil.