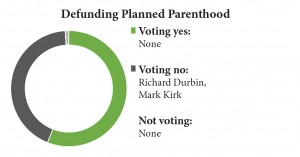 Defunding Planned Parenthood: Voting 53 for and 46 against, the Senate on Aug. 3 failed to reach 60 votes needed to advance a GOP-drafted bill (S 1881) to permanently end federal funding of the Planned Parenthood Federation of America, a nonprofit organization that provides low-income patients with health services such as reproductive care, sex-education counseling and screening for cervical and other cancers. Planned Parenthood says it serves 2.7 million women and men annually at 700 clinics nationwide, with abortions accounting for about 3 percent of its services.

Jodi Ernst, R-Iowa, said the videos show that “Planned Parenthood — the nation’s single largest provider of abortion services — is harvesting baby body parts. The American people are shocked and horrified by the utter lack of compassion and disregard shown by Planned Parenthood for these women and their babies.”

A yes vote was to advance the bill toward a vote on final passage.