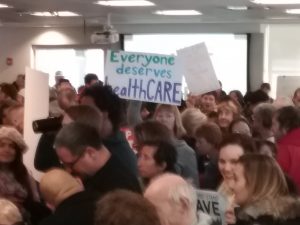 In the six months after being diagnosed with leukemia, Carlo Travato of Chicago went through 15 spinal taps with chemotherapy, 11 hospitalizations, three bone-marrow biopsies, and countless units of blood and platelets.

“Cancer is expensive and I knew that when I called our insurance company and asked whether this awful disease could bankrupt us,” his wife, Tracy, said about Carlo’s 2013 diagnosis. “That day I learned some of the sweetest words an insurance representative can say, ‘No, ma’am, you don’t have a lifetime cap anymore. President (Barack) Obama took care of that with the Affordable Care Act.’”

She said the lifting of lifetime caps is one of the best-kept secrets of the health care law.

Stories like the Travatos’ were intertwined with calls for action from top Democrat leaders in the state, including U.S. Sen. Dick Durbin, Congressmen Raja Krishnamoorthi, Mike Quigley and Brad Schneider, and Congresswoman Jan Schakowsky, at a rally Sunday, Jan. 15 at Service Employees International Union’s Healthcare Illinois & Indiana headquarters on Chicago’s South Side. The rally kicked off efforts to fight the ACA’s potential repeal, a lynch pin of President-elect Donald Trump’s campaign.

Schakowsky said a study has been released that shows that Illinois would lose more than 117,000 jobs in 2019 and more than $33 billion in federal dollars between 2019 and 2022, if the Affordable Care Act is repealed without a replacement

“Where is Gov. (Bruce) Rauner’s voice?” Schakowsky asked. “He should be shouting from the rooftops of all his houses.”

Cook County Board President Toni Preckwinkle noted that her board always begins its meetings by reciting the Pledge of Allegiance and stressed the ending of the pledge, which states “justice for all.” 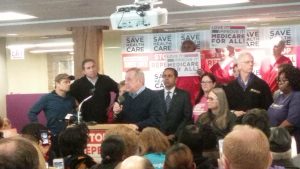 U.S. Sen. Dick Durbin (D-Ill.) talks about the importance of health care for all during a rally Sunday at SEIU Healthcare on Chicago’s South Side. (Photo by Kevin Beese/For Chronicle Media)

“Those of us who believe in the ‘for all’ part of that have a lot of work to do,” Preckwinkle said. “and we need to remember this is our country, all of our country. We’ve got to be part of the resistance. Let’s get going.”

Durbin shared with the crowd assembled in the SEIU hall and the overflow crowd watching on a large-screen television in the parking lot behind the building a conversation he had with U.S. Sen. Bernie Sanders, who told the Illinois senator that the fight for health care must be taken to cities across the country.

“We’ve got to bring out people who really care about this issue and let the politicians of both parties know how important this debate is for the future of health care in America,” Durbin said.

Rallies like that one that took place Sunday on Chicago’s South Side occurred in locations throughout the country over the weekend in an effort to sway decision makers considering a repeal of the Affordable Care Act.

Durbin said a repeal cannot occur without a replacement program in place. Illinois’ senior senator said fathers who do not have insurance and have a child get sick remember the angst they feel at that moment for as long as they live.

“I was that father. It happened to my family,” Durbin said, “and I thought to myself, ‘God forbid anyone else would have to live through this, wondering if your daughter was going to get the medical care she absolutely needed. 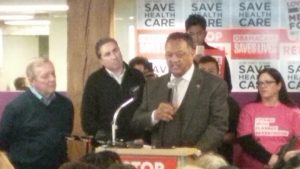 The Rev. Jesse Jackson talks to rally attendees, telling them that many Trump supporters need the provisions of the Affordable Care Act, but don’t want it because it has been dubbed “Obamacare.” “They want an omelet but don’t want the eggs,” Jackson said. (Photo by Kevin Beese/For Chronicle Media)

“We all rise and fall together. It’s time to rise again,” Jackson said. “We must now organize the Trumpsters who need health care.

“The reason I always objected to use of the term Obamacare is that it was always designed to poison the program by poisoning him. There is no such bill as Obamacare. It’s the Affordable Care Act. You’ve got people that want affordable care, but don’t want Obamacare. They want an omelet but don’t want the eggs. We need to go out and organize those Trump voters who need the Affordable Care Act. They can’t afford not to have it.”

— Durbin leads rally in Chicago to keep health care for all —