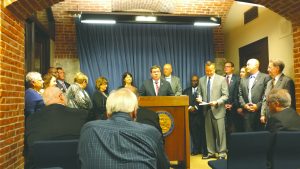 Illinois State University President Larry Dietz joins the Build Up Illinois Coalition during a news conference Friday at the capitol in Springfield. The group includes lawmakers and organization leaders lobbying for greater funding for new buildings in a capital bill. Dietz said his university has had to move money from operating funds to building maintenance in the absence of capital spending by the state government. (Photo by Jerry Nowicki/Capitol News Illinois)

SPRINGFIELD — As discussions of the state’s first capital improvements bill in more than a decade continue, a new coalition launched an effort Wednesday, May 1 to increase the focus on vertical infrastructure projects.

The coalition calls itself Build Up Illinois and is composed of representatives of K-12 education, higher education, union groups, hospital advocates and more. Their goal is to put a focus on funding for new buildings in addition to road and bridge projects.

According to a news release from the coalition, the Illinois Capital Development Board estimates repairs would cost $7.8 billion at state facilities, just under $6.7 billion for public universities and $9.4 billion for preK-12 schools. The funding needed for road, bridge, sewer and water projects numbers in the billions as well.

Still, he said he was optimistic that some type of capital bill would get done by the time the General Assembly adjourns May 31.

“I would expect within the next few weeks we would see … the beginning phases of a bill that would represent, I would hope, some bipartisan agreement both on the spending side and the revenue side,” Manar said.

In terms of revenue, Manar said the General Assembly has funded previous capital bills with taxes on gaming and liquor, and a gas tax and licensing fee hike is on the table as well. Funds resulting from a higher gas tax would be constitutionally mandated for use on road and bridge safety thanks to a “lock box” amendment passed in 2016.

Manar said there would be “significant discussion” about other revenue sources, including a tax on ride sharing services among many others.

The advocates at the meeting listed their needs in the hundreds of millions of dollars for such projects as hospital upgrade grants, university and community college buildings, and more.

Elgin Community College President David Sam said campuses have had to choose whether to continue offering classes and services to students or spending that money on HVAC or boiler repairs.

“Forty-eight out of every hundred high school graduates are going out of state,” Sam said. “Our facilities in Illinois are crumbling, and these students see them.”

Illinois State University President Larry Dietz said his university has had to move money from operating funds to building maintenance as well.

“Over the past five years, we have invested between $4 million and $6 million annually of our own resources in general revenue on construction of facilities to ensure that they remain safe and functioning,” Dietz said. “Had capital funds been available, that money could have been used for scholarships, additional faculty and support staff or new technologies.”

A.J. Wilhelmi, president of the Illinois Health and Hospital Association, said his organization is proposing the “Hospital Transformation Capital Program,” which calls for $500 million in state capital funds for hospitals that need to transform their aging facilities to provide modernized care.

“The health care landscape is changing dramatically from an inpatient-based system to an outpatient-focused system,” Wilhelmi said. “This means that hospital buildings constructed over the past century to provide inpatient care need to be modernized, and in some cases, repurposed to fit today’s health care model.”

Michael Carrigan, president of the Illinois AFL-CIO, said the “the 900,000 union members across the state are willing partners in support of a capital plan that addresses needed repairs and upgrades as well as new construction.”