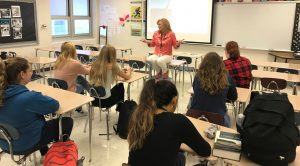 The Illinois State Board of Education is looking at eliminating some of the required tests to ease the financial burden on teaching candidates.

Chuck Lane has a diversity issue in his south central Illinois school district.

The superintendent of Centralia High School District 200 says just one of his 66 teachers can be classified a minority despite 25% of his students being identified as minorities.

“We’ve been to job fairs and we have been unsuccessful,” Lane said.

Compounding the issue, Lane said, is the fact that he has two black staff members who want to be teachers but don’t have the proper certification. One is a paraprofessional; the other is a support supervisor.

Although both want to teach, neither can afford to go back to school full time to get their certification.

Lane said he also has been trying to hire a science teacher for seven months.

Offering a salary of $41,000, his district is one of the higher paying in the area, he said. If he is having problems with diversity hiring and hiring overall in his district, what is happening in lower-paying area districts, he wondered.

“We all want to hire well-rounded individuals with four-year degrees,” Lane said. “Right now, we are not even getting candidates.”

Lane’s experiences are not unique as the Illinois State Board of Education is looking for ways to address the statewide teacher shortage.

The State Board is looking at eliminating some of the required tests to ease the financial burden on candidates, providing an easier path for individuals without education coursework backgrounds to get their teaching certification, and putting teachers back in esteemed ranks through marketing to bolster the image of the profession and get more young people into the field.

The Golden Apple program is looking to help by increasing its targeting of potential teachers. The organization has a program that takes high school seniors through college sophomores and provides them with mentoring all the way through the first five years of their teaching careers.

Alicia Winckler, CEO of Golden Apple, said the mentoring program has been hugely successful with 80 percent of participants graduating from college and 82 percent of those who graduate still teaching after five years.

Winckler said with an additional $3.5 million, Golden Apple could accept 150 more candidates into the mentoring program.

Alan Mather, president of Golden Apple, presented the idea of an accelerator program where individuals in alternative education programs could get their certification in one year rather than two as requirements now stand.

The program would be for individuals already with a four-year degree, Mather said.

“It would be a one-year residency program where individuals would get a stipend as they continued their education in a master’s program,” Mather said.

The accelerator program could be seeking as much as $10 million from the State Board of Education in 2020.

No action was taken on any of the proposals at the April 17 State Board of Education meeting.

In a statement, the board said it is “committed to reducing barriers while maintaining high standards” for teachers.

Board members said they were appreciative of individuals who gave input on the shortage.

“The board engaged in multiple hours of testimony and discussion and is deeply appreciative of everyone who attended and provided their perspectives,” the state education panel said.

“The voices of stakeholders across the state reinforced how deep and structural the teacher shortage is and how its effects are felt differently across the state. The board recognizes the sense of urgency in addressing the issue.

“The board has taken positions on several pieces of legislation moving through the General Assembly. The board is neutral on eliminating the test of basic skills, understanding that teacher preparation programs assess candidates’ basic skills upon their application to the program. The board is opposed to eliminating the edTPA (a national, subject-specific portfolio-based assessment of teaching performance) and the content tests, which respectively look at how a teacher teaches and that they know what they are teaching.”