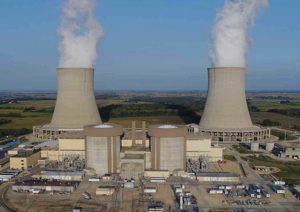 Exelon announced in August 2020 that it plans to shutter its Byron and Dresden power plants later in 2021. (Exelon Corp Photo)

SPRINGFIELD – The Illinois Senate approved an energy bill in the early hours of Wednesday morning Sept. 1, but it’s likely to change as negotiations continue in the House, which has not set a date as to when it will return.

A lead negotiator in the House said time is of the essence with key deadlines arriving for renewable energy investments and the potential closure of two nuclear power plants.

“So we are very confident that we’re going to get this done.” Rep. Marcus Evans Jr., a Chicago Democrat who is in the House energy working group, said in a phone call Sept. 1. “So we’ll be back hopefully in a few days.”

The measure being considered, contained in amendments to Senate Bill 18, was filed the evening of Aug. 31 shortly before midnight after another measure contained in House Bill 3666 failed to gain the support of environmental groups, the governor and the House speaker during negotiations earlier in the day.

Decarbonization timelines for municipal coal-fired power plants continued to hold up the bill’s passage, so the new bill was filed with the same language so that conversations could continue in the House.

Sen. Michael Hastings, D-Frankfort, sponsored both bills, hailing the measure that passed Sept. 1 as “the most equitable, diverse and inclusive clean energy bill in the entire country.”

It’s a wide-ranging bill creating and funding equity-based training programs, subsidizing nuclear plants and renewable energy, and more. The bill provides that the Energy Transition Assistance Fund, which funds workforce initiatives, will receive up to $180 million annually from a charge on ratepayer bills.

Some of the other major expenditures in the bill include a nearly $700 million five-year subsidy of nuclear plants, and doubling the rate cap from about 2 percent to 4 percent for the charge on ratepayer bills to fund renewable projects.

Nuclear power already provides about 60 percent of the state’s energy mix, and will at least have to continue to produce that much for grid sustainability as the state aims to reach a 100 percent carbon-free energy future by 2050, a goal set in the bill.

Exelon, which owns the six nuclear power plants in Illinois, has threatened to close two plants — one  in Byron, one in Dresden — potentially as early as mid-September, claiming they’re not profitable without state subsidies. Labor union advocates testified that the plants had 14 days as of Aug. 30 before closure, which would cost 28,000 direct and indirect jobs.

As it stands, renewable resources contribute about 7-8 percent of the state’s energy mix, but the bill sets a goal of increasing that to 50 percent by 2040 through the increased investment.

Hastings said due to the passage of a statutory deadline for the state’s Renewable Portfolio Standard, funds from a pool of money meant for renewable resources are being returned to ratepayers “at the effect of a million dollars a day.”

“So if we fail to take action, that investment in the renewable energy, whether it’s wind or solar, will continue to deplete from that fund,” he said. 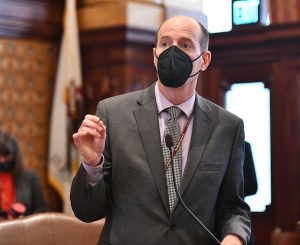 Sen. Bill Cunningham, a Chicago Democrat, has been a lead negotiator on the Senate Bill 18 energy package. (Photo courtesy of illinoissenatedemocrats.com)

Downstate Republicans in floor debate Wednesday morning noted only one nuclear plant provides energy downstate on the MISO power grid, so goals of 100 percent carbon-free energy by 2050 would be more difficult to reach outside of the Chicago area.

Sen. Chapin Rose, R-Mahomet, warned that downstate might end up having to rely on fossil fuels from neighboring states if coal and gas plants go entirely offline within the stated time frames.

Sen. Bill Cunningham, a Chicago Democrat, said the bill requires the Illinois Environmental Protection Agency, Illinois Commerce Commission and Illinois Power Agency to conduct a study at five-year intervals “to determine if there is grid reliability.”

“And if there are concerns about grid reliability, it would delay the closure of some of the gas plants, so there is a provision in the bill that will examine and make sure that renewable generation and battery storage has gone up before some of the closures are allowed to happen,” he said.

Gas plants would have to close or transition to a non-carbon emitting energy source such as “green hydrogen” by 2045 under the bill.

Rose also expressed concerns about language allowing a private company to invoke eminent domain, which Hastings said applies one time in seven counties for the purpose of a single transmission line.

Cunningham, who is one of the lead Senate negotiators on energy, said the company given that authority is Invenergy, for the Grain Belt Express direct current transmission line. It must follow a standard eminent domain process, Cunningham said.

“It has to go to the Illinois Commerce Commission, and it has to go to court,” Cunningham said. “Nobody’s property is going to be taken away from them without due process and without giving them the full market value of whatever property a power transmission line has to go over and claim an easement.”

One main hold-up continues to be how to decarbonize municipal coal plants. The governor’s office and environmentalists favor language that contains a hard 2045 shutdown date for the City, Water, Light and Power coal plant in Springfield and the Prairie State Energy campus in the Metro East area near St. Louis. The Senate offered such a closure date, but the governor and environmental groups also want strict declining caps for carbon emissions from the plant.

“The Governor’s Office is in discussions with stakeholders to ensure that Prairie State and CWLP’s closure in 2045 includes real interim emissions reductions consistent with previous bill drafts, and is committed to working with the General Assembly to address some drafting errors in the Senate bill that the Governor raised during talks today because they could have unintended legal consequences,” Pritzker spokesperson Jordan Abudayyeh said in a statement.

In a news conference after the Senate vote, Senate President Don Harmon, D-Oak Park, said it may be difficult to reach a consensus on the declining carbon caps along with a hard closure date, because a coal plant would have to spend billions of dollars to install the carbon capture technology, only to be guaranteed that the plant would be taken offline in the next 24 years.

The Senate offered a declining cap option with coal plants required to reach net zero emissions by 2045 with a possibility of staying open if they do, but that was rejected by the governor’s office. They countered with a hard 2045 closure date and no declining caps, but that was also rejected.

“We are very open to being proved that some hybrid can work. My intuition is just that’s going to be a real challenge,” Harmon said.