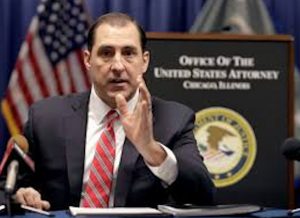 U.S. Attorney for the Northern District of Illinois John Lausch Jr. said that assistant attorneys from his office will be part of a Justice Department’s strike force targeting antitrust crimes, such as bid-rigging conspiracies. (CBS News photo)

Assistant U.S. attorneys from the Northern District of Illinois will be part of a U.S. Justice Department Procurement Collusion Strike Force, focusing on deterring, detecting, investigating and prosecuting antitrust crimes, such as bid-rigging conspiracies and related fraudulent schemes.

“Government procurement is vulnerable to corruption and too often results in inferior goods and services at a higher cost to taxpayers,” said John Lausch Jr., U.S. attorney for the Northern District of Illinois. “We will work aggressively with the Antitrust Division and our investigative partners to hold accountable individuals and companies who seek to corrupt the procurement process.”

“To protect taxpayer dollars, the Justice Department is doing its part to eliminate anticompetitive collusion, waste and abuse from government procurement,” said Deputy Attorney General Jeffrey Rosen. “To ensure taxpayers the full benefits of competitive bidding, experienced investigators and prosecutors with the necessary expertise will partner in this Strike Force to deter, detect and prosecute antitrust crimes and related schemes in government procurements.”

“The investigation and prosecution of individuals and organizations that cheat, collude and seek to undermine the integrity of government procurement are priorities for this administration,” said Assistant Attorney General Makan Delrahim of the Antitrust Division. “The PCSF will train and educate procurement officials nationwide to recognize and report suspicious conduct in procurement, grant and program-funding processes. We will aggressively investigate and prosecute those who violate our antitrust laws to cheat the American taxpayer.”

The PCSF will lead a national effort to protect taxpayer-funded projects at the federal, state and local level from antitrust violations and related crimes, starting with a focus on 13 districts throughout the country. Prosecutors from the Antitrust Division and the participating U.S. attorneys’ offices, along with agents from the Federal Bureau of Investigation and partner offices of Inspector General, will work together to conduct outreach and training for procurement officials and government contractors on antitrust risks in the procurement process. In addition, the partnered prosecutors and investigators will jointly investigate and prosecute cases that result from their targeted outreach efforts.

The Antitrust Division and its law enforcement partners have a history of prosecuting criminal antitrust conspiracies that take advantage of government contracts. In late 2018 and early 2019, for instance, five South Korean oil companies pleaded guilty for their involvement in a decade-long bid-rigging conspiracy that targeted contracts to supply fuel to U.S. military bases in South Korea. The Antitrust Division also indicted seven individuals for conspiring to rig bids and to defraud the government, and one executive was also charged with obstruction of justice. In total, the companies have agreed to pay $156 million in fines and more than $205 million in separate civil settlements. This year, the U.S. Justice Department, in partnership with the U.S. General Services Administration Office of Inspector General, also indicted individuals for involvement in rigging bids submitted to the GSA.

In addition to the Northern District of Illinois, the PCSF’s other U.S. Attorney partners are:

The PCSF’s investigative partners include:

The PCSF has launched a publicly available website — https://www.justice.gov/procurement-collusion-strike-force —  where government procurement officials and members of the public can review information about the federal antitrust laws and training programs, and report suspected criminal activity affecting public procurement.

Individuals and companies are encouraged to email the PCSF at pcsf@usdoj.gov to report anti-competitive conduct involving federal taxpayer dollars.