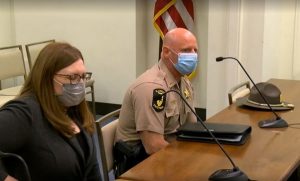 SPRINGFIELD – The Illinois State Police has given another 150-day extension to people whose Firearms Owners Identification cards or Concealed Carry Licenses have expired due to a backlog in processing renewal applications.

A panel of state lawmakers gave approval Tuesday, April 13 to that emergency rule after ISP officials assured them that the agency had made significant progress toward clearing a backlog of renewal applications.

“I wouldn’t say we’re over the hump. We’re on top of it,” ISP Lt. Greg Hacker, who heads the agency’s Firearms Services Bureau, told the Joint Committee on Administrative Rules. “Over the past three months, our metrics have shown us that we are starting to bend the curve in our direction.”

Under the emergency rule, a FOID card or CCL that has expired since the start of the pandemic is still considered valid as long as the holder has applied for renewal, paid the required fees, and the card is not subject to revocation, meaning the person has not committed an offense that would otherwise disqualify them from holding the permit.

Yvette Loizon, ISP’s general counsel, said that in the month of March alone, the agency received 14,847 renewal applications, and it approved 67,847 applications, the largest number of approvals in a single month in more than a year.

ISP saw a huge increase in renewal applications last year, Hacker said, in part because FOID cards are issued on 10-year renewal cycles and the 2019-2020 period marked the end of the program’s first 10-year cycle.

But the program has been beset by funding and personnel shortages, officials have said. The application and renewal process involves extensive criminal background checks that are paid for with the fees paid by applicants. But that fee fund was often “swept” during the state’s two-year-long budget impasse, so the agency did not have enough staff to handle the flood of renewal applications that came in last year.

Hacker said ISP began 2020 with only 21 “firearms eligibility analysts,” or FEAs, who are trained to process applications. Since then, he said, the agency has hired an additional 29 FEAs and it plans to hire another five or six by July. In addition, ISP has hired another 25 contractual employees to conduct background checks for both new and renewal applications.

But Hacker said it has been a slow process to get all of those new employees fully operational because the training process generally takes about six months.

Meanwhile, gun rights activists in Illinois have grown impatient. Although state law requires ISP to process applications within 30 days, many have complained of waiting several months before ever getting a response from the agency.

In July, the Illinois State Rifle Association and the Second Amendment Foundation filed a federal lawsuit against ISP, arguing that the FOID card processing delays were effectively violating the applicants’ constitutional right to bear arms. That case is still pending, according to court documents.

Members of the joint committee pointed out that they have been hearing complaints from constituents for months.

Sen. Bill Cunningham, D-Chicago, a co-chair of the committee, said he has also heard complaints from constituents.

“So we’re gratified to see that the process is moving up (and) ask you to continue to work with JCAR staff on this,” Cunningham said. “There’s been a long-standing problem that has only gotten worse because of COVID. So, it’s something that still demands a long-term solution.”