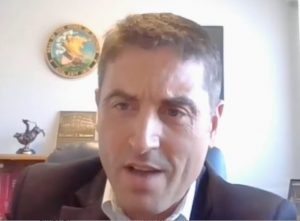 Rep. Mike Marron, R-Fithian, speaks during a Zoom news conference Friday, Jan. 22 about what he said will be detrimental effects to small businesses in his district from the proposed decoupling bill. (blueroomstream.com)

SPRINGFIELD — A bill endorsed by Gov. J.B. Pritzker that would eliminate expanded federal tax deductions for businesses created under the CARES Act, failed to pass in the lame duck session.

While Pritzker has said he’s confident it will come up for a vote in the upcoming regular session, Republican lawmakers are raising concerns about the impact the bill would have on small business owners, potentially affecting 440,000 taxpayers statewide.

Some Republicans, who have called the bill a “tax hike,” are also questioning whether there is enough time to pass substantial changes to the tax code, with tax season only a few weeks away.

Rep. Steve Reick, R-Harvard, said the clock is running out for the Legislature to pass this bill, especially since the state Senate on Thursday, Jan. 21 canceled its planned session beginning Jan. 26.

“We’re looking at the middle to end of February before any of this can be can be laid to rest,” Reick said Friday, Jan. 22 during a Zoom news conference.

Pritzker initially estimated that the bill would preserve $500 million in state revenue, but that figure increased to $1 billion by the time it came up for a vote on the floor of the House of Representatives in the early morning of Jan. 13.

A spokesperson for the Department of Revenue, in an email, said it’s “optimal” to pass decoupling legislation before the start of the tax filing season because taxpayers have not yet filed returns.

“The 2020 tax filing season will not open until February 12, but the opening of the season does not preclude passage of legislation after that date,” DOR spokesperson Terry Horstman wrote.

Pritzker and Democratic lawmakers who supported the measure argue it is needed to prevent state revenues from shrinking by more than $500 million during the current fiscal year, thereby increasing the state’s $3.9 billion budget deficit.

In responding to a question during his news conference Friday, Pritzker said decoupling is “a fairly standard movement,” and described the CARES Act tax provisions as a massive tax decrease for some of the largest businesses.

“Now what (former President Donald Trump and Congressional Republicans) also did was affect state revenues across the United States, which is why 26 states are decoupling and an additional nine states already were automatically decoupled, but other states that don’t have an income tax were not affected by decoupling,” Pritzker said.

He accused Republicans in the Legislature of failing to propose a plan to balance the budget.

Reick said the General Assembly can find ways to reduce the deficit by cutting spending, rather than increasing taxes on small businesses that are already hurting because of the COVID-19 pandemic.

“I think we if we looked at every department, we could find areas to cut,” Reick said, adding that he’s still interested in the data from Pritzker’s request in September 2020 when he asked his agency heads to each reduce spending by 5 percent.

“And when you obligate yourself to spend more money while you’re already facing a very large deficit, I don’t think anybody is demonstrating any appetite for fiscal responsibility at this point,” Marron said during the news conference. “I’m not even willing to discuss tax increases until somebody actually acts like they want to approach the budget with some kind of constraint.”

During the news conference, Reick, Marron and Rep. Mike Murphy, R-Springfield, also criticized the governor and the Department of Revenue for not bringing the bill forward immediately after the CARES Act made those changes to the federal tax provisions in March.

A Department of Revenue spokesperson did not respond to a question about when the department became aware of expanded federal deductions passed in the CARES Act, and the need for decoupling.