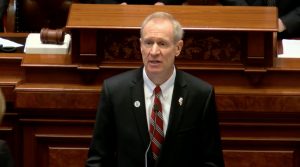 Gov. Bruce Rauner, during his State of the State address last week, said that throughout the state’s history, Illinois has been a magnet for workers and entrepreneurs, and envisioned that spirit of job creation building once again. (Blueroomstream.com)

During his State of the State address last week, a frequently smiling Rauner talked about the good that has come and is coming from Illinois. He also talked about great days ahead for the Land of Lincoln with a cooperative spirit and leaders working together.

He touted Illinois’ connection with everything from Tesla Motors to Twinkies and Jane Addams’ heroic social work to Jackie Joyner-Kersee’s heroics in track and field.

“Our people lead the world in hard work and innovation,” Rauner said. “You name the field and we’ll name the pioneers.”

He said that throughout the state’s history, Illinois has been a magnet for workers and entrepreneurs, and envisioned that spirit of job creation building once again.

“If you wanted to till the soil, lay a brick, build a building, make a deal, super-compute, you name it, you could find work in Illinois, afford a home and rely on the public schools to educate your children,” the governor said. “Today, we have an opportunity to turn yesterday into tomorrow and make Illinois the powerhouse job creator it should be.”

He said Republicans and Democrats joined forces to make a bid for Amazon’s second headquarters last fall — a bid that has gotten Chicago into the final 20 for the headquarters. That cooperative spirit can do wonders for the Illinois economy, he said.

“The fact is there is another, much bigger Amazon-like opportunity to pursue. The request for proposal comes from an enterprise called the state of Illinois,” Rauner said. “We have the assets and we certainly have the incentives: 12.8 million fellow citizens who want us to ignite our economy.

“But this is not a prize one wins alone. It takes a collaborative effort, a forget-about-the-politics-and-roll-up-our-sleeves kind of approach. It requires laser-like focus on economic development and job creation and a bipartisan dedication to restore public trust.

“This legislative session is a chance to put in place the policies, the changes, the fiscal discipline to recruit many more Amazons. United, we can create thousands and thousands of jobs, attract billions of dollars in investment and set millions of Illinoisans free to make more, buy more, build more.”

He called for a revamp of the property tax assessment system, saying that ordinary people — individuals without clout, connections or high-powered lawyers — are victims of a system rigged against them.

“For too long, big business and the well-to-do have gotten huge tax breaks while little guys and little businesses take it in the pocketbook,” the governor said. “Home values in some parts of our state are half what they were 10 years ago, yet property taxes are twice as high. Small businesses often have to cut staff to pay their taxes. Elderly couples on fixed incomes are too often pushed out of their homes because they cannot afford their property taxes.”

He called the current assessment system a vicious form of oppression that traps people in their homes, vaporizes their equity, drives their mortgages under water, and in some cases, pushes people out of the state.

“It’s time to put a stop to the corruption,” Rauner said.

The governor noted that he recently issued an executive order that prevents legislators from practicing before the state property tax appeal board. He touted legislation being introduced by state Sen. Jim Oberweis (R-Sugar Grove) and state Rep. Grant Wehrli (R-Naperville) that calls for the same reform requirement for every legislator who might practice before an assessment appeal board anywhere in the state.

He also called for lawmakers to provide property tax relief, giving people the ability to lower their property taxes through a simple voter referendum.

“Eighty percent of the state’s voters want term limits. The other 20 percent, it seems, are seated in this chamber and in elected Illinois courts,” Rauner said to the joint session of the state House and Senate. “It is past time to make this good governance move. Put term limits on the ballot and let the people decide.”

—- Governor: ‘Little guys take it in the pocketbook —