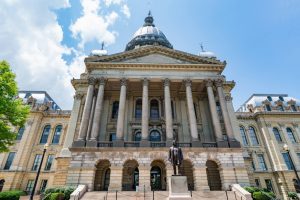 SPRINGFIELD – An ethics bill that was hotly debated during the spring legislative session is headed back to the General Assembly with a request for a technical change, but not the technical change that many Republicans had hoped for.

Gov. J.B. Pritzker on Friday, Aug. 27 issued an “amendatory veto” of Senate Bill 539, saying he supports the legislation but would like to see a minor change in language dealing with the office of executive inspector general.

“I am pleased by progress made by my partners in the General Assembly in their efforts to pass meaningful ethics reform, and I support the steps taken in this bill,” Pritzker said in his veto message.

The bill came in the wake of a number of scandals over the previous two years involving current and former lawmakers as well as the lobbying activities of utility giant Commonwealth Edison.

One of those involved was former Rep. Luis Arroyo, a Chicago Democrat who also had a lobbying firm that lobbied the city of Chicago on behalf of a company involved in the sweepstakes gaming industry. He and the owner of that company were charged with attempting to bribe a state senator to support legislation that would have benefitted the company.

Among other things, the bill prohibits legislators and executive branch constitutional officers from engaging in “compensated lobbying” of a municipality, county or township. The same applies to elected and appointed executive or legislative officials of county, municipal or township governments.

It also gives the legislative inspector general independent authority to launch investigations, but only after a formal complaint is filed. It also restricts those investigations to matters that arise out of government service or employment, not to outside employment.

The bill also makes a number of changes to financial disclosure requirements and limits the ability of lawmakers to leave office and immediately go to work as lobbyists.

The bill passed the General Assembly on the final day of the spring session, June 1, by overwhelming majorities — 56-0 in the Senate; 113-5 in the House — even though many Republicans complained that they didn’t think the bill went far enough.

Soon after it passed, Legislative Inspector General Carol Pope announced that she would resign, effective Dec. 15, calling the job a “paper tiger” and it showed that “true ethics reform is not a priority” for the General Assembly.

Following that announcement, some legislative Republicans called on Pritzker to use his amendatory veto power to send the bill back for revisions.

“There are very tiny aspects of this bill that are necessary, but it barely scratches the surface of what truly needs to be accomplished to clean up our state government and produce real ethics reform,” Rep. Avery Bourne, R-Morrisonville, said in a statement at the time. “The biggest fault of this bill is that it limits the legislative inspector general, who is supposed to be an independent watchdog over the legislature. At a time when we have seen countless elected officials indicted and ongoing federal investigations, we need stronger anti-corruption reforms to restore the public’s trust.”

Specifically, he pointed to a change made in the bill that says the executive inspector general may receive and investigate complaints of wrongful behavior “without advance approval of the executive ethics commission.”

“However, advance approval of the Executive Ethics Commission has never been required,” Pritzker said in his veto message. “The addition of this language inadvertently confuses the clear authority that the EIGs have under current law.”

Pritzker asked lawmakers to delete that language and return the statute to its original form.