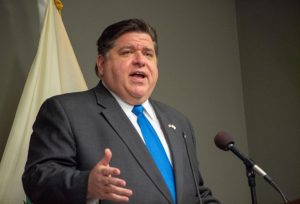 SPRINGFIELD – Gov. J.B. Pritzker says he will consider ideas for directing hundreds of millions of new dollars toward K-12 education in the upcoming fiscal year, but proponents of such spending must offer up ways to cut government spending or raise necessary revenues elsewhere.

He made those comments in an interview with Capitol News Illinois Monday, March 15, one of several interviews he did with news organizations to mark one year since the COVID-19 pandemic changed daily life for residents of Illinois and beyond.

“If somebody proposes an idea for spending new money…or continuing the tax expenditures of corporate welfare, I’m open to conversations and discussions about that,” Pritzker said regarding his proposed state budget. “But they’ve got to tell me what else it is that they want to cut or where they’re going to come up with revenue to make sure that we can balance the budget.”

Pritzker also discussed whether the pandemic has affected his relationship with lawmakers and whether his use of executive authority over the past year has redefined the powers of the governorship.

He said while some Republicans have “politicized” the pandemic, he believes he and Democrats in the General Assembly have a united focus as to where money should be spent.

“I think we all have the same goals here,” he said. “And what we want to do is make sure we fund education properly, that we do everything we can for social services and providing health care for people across the state. And then fiscal responsibility is something we all have to be focused on.”

Still, he said, the pandemic has made budgeting difficult, and the state should be careful when allocating more than $7 billion in funding it will receive from the American Rescue Plan, a recent pandemic relief package passed by the federal government.

Pritzker said the federal funds should be treated as a one-time infusion that shouldn’t be seen as a replacement for the base revenues needed to maintain state programs. The state has borrowed more than $3 billion from the Federal Reserve in response to the pandemic in previous fiscal years, and Pritzker said repaying those loans is a priority.

“We have to make sure we pay the bills, any bills that are owed as a result of COVID,” he said. “And then I think we need to focus our dollars on igniting the economy, making sure that we’re doing everything we can to get people back to work and to attract businesses and get businesses going. All of that is, I think, incumbent upon us with these dollars. “

He also warned the state will have “lingering expenses and expenditures as a result of COVID” in upcoming fiscal years.

“These are going to typically be health care related. And so we just need to account for that as we look at what to do with the dollars that are being provided,” he said.

Conversations are already ongoing with lawmakers as to how to allocate the funding, he said. The money must be allocated by the end of the year but can be spent until 2024, the governor said.

Pritzker also touched on his desired changes to the corporate tax code, which are necessary to balance his proposed budget.

The tax changes include a temporary cap on net operating loss deductions that is expected to net more than $300 million, canceling a planned phase-out of the corporate franchise tax to net $30 million, and ending lower tax rates for foreign-sourced dividends to bring in more than $100 million.

There are six other corporate changes as well which will require action from lawmakers.

When asked if Democratic lawmakers are on board with the changes, Pritzker said most of the resistance has come from “the business lobbyist groups, like the Chamber of Commerce, like the Manufacturers Association, and no doubt, they put pressure on lawmakers on both sides of the aisle.”

“They’re very powerful, they have money. And they can, you know, lead legislators to even vote for things that are against their interests or against the interests of their constituents. But I think the most important thing is that we’ve got to balance the budget,” he said.

Pritzker first issued a stay-at-home order almost exactly one year ago and has since issued dozens of executive orders in response to the pandemic. Asked if his use of executive authority has redefined the governorship, Pritzker downplayed the idea.

“Well, I think it’s precisely what past governors have done, as you’ve seen in the past, when there’s been a flood, for example, you know, floods don’t end at 30 days, floods end whenever the flood recedes,” he said. “And the same thing is true about coronavirus. You know, we’ve had to react to it…this is the most unusual thing that anybody’s ever seen in the history of the United States in terms of an emergency, including the pandemic in 1918.”

“It’s important to recognize that, you know, how we handled it when the legislature was not in session and chose not to be in session was to do what other governors have done, which is treat it like an emergency, do whatever it is that we needed to do to save lives,” he added.

He also noted that with existing vaccine infrastructure he believes the state will be able to open vaccinations up to all Illinoisans by May 1 or even sooner, a goal set by President Joe Biden earlier this month.

“I feel very confident that we can meet that date. And I think we might be able to do a little bit better,” Pritzker said.