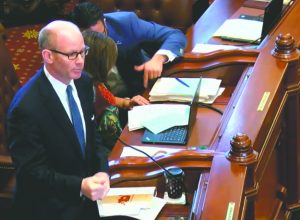 Democratic state Sen. Don Harmon argues on the Senate floor in favor of a resolution to place on the 2020 ballot a constitutional amendment question that would allow the state to impose a graduated income tax. The measure passed on a straight party-line vote of 40-19 and now moves to the Illinois House. (BlueRoomStream.com)

SPRINGFIELD — A graduated income tax amendment is on the move at the Illinois State Capitol.

On a busy Wednesday, May 1 afternoon, Senate Democrats advanced the proposal, House Republicans held a news conference bashing it, and Democratic Gov. J.B. Pritzker addressed two organizations composed of members who are vocally opposed to it.

Senate Joint Resolution Constitutional Amendment 1, which would allow the placement of a graduated tax question on the November 2020 general election ballot, passed with support from all 40 Senate Democrats and no Republicans.

“I believe the crafters of our current Constitution, which included a flat tax and was embraced by the people of Illinois, designed it specifically to protect middle-income families from politicians,” Brady said.

Oak Park Democratic Sen. Don Harmon, SJRCA 1’s sponsor, said the flat tax, which is currently 4.95% on all Illinoisans, does the opposite.

“You are protecting the uber rich, not the middle class,” Harmon said.

A graduated tax would allow the state to impose higher rates on greater margins of income.

Senate Bill 687, carried by Olympia Fields Democrat Toi Hutchinson, contains the rate structure which would go into effect should the constitutional amendment become law. It passed with votes from 36 Democrats. 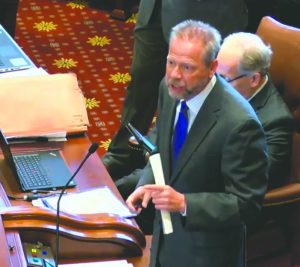 Republican state Sen. Dale Righter speaks against a proposed graduated income tax rate structure that would go into effect in 2021 if voters approve a constitutional amendment in the 2020 general election, arguing that such a plan could easily be changed in future years. The bill, which would set the tax rates structure, passed, 36-22, and now moves to the Illinois House. (BlueRoomStream.com)

“The people who have been hit the most and the hardest with lack of opportunity and the loss of the services we all rely on, are the folks that everyone keeps saying we need to stand up and we need to protect,” Hutchinson said. “So far this is the only plan that does that. There is no other plan on the table to deal with $3.4 billion of a structural deficit that we all know we have.”

Per the bill, single filers would pay the maximum rate of 7.99% on all income once their taxable income tops $750,000. For joint filers, that rate takes effect once income tops $1 million.

But Republicans, including Jason Barickman of Bloomington and Dale Righter of Mattoon, said there is no guarantee the rates provided in this plan will stay as advertised for any period of time.

Righter said other states with graduated tax structures have raised the top rate 24 times over the past 20 years and on several occasions the income threshold necessary to meet the top rate has dipped below $100,000.

But Hutchinson said the threshold to raise taxes will remain the same as it was before the amendment, and a state-by-state comparison does not adequately sum up Illinois’ situation. She said the “hollowing out of state government” has affected lower-income earners while the flat tax “worked just fine” for the wealthiest Illinoisans, who are trying to protect it.

Her bill also increases by $100 million the state’s investment in local governments and raises the corporate tax rate from 7% to 7.99%, with an existing corporate replacement tax up to 2.5% applying to businesses, making the top corporate rate 10.49%. 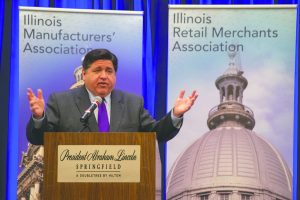 Gov. J.B. Pritzker speaks before a joint luncheon of the Illinois Retail Merchants Association and the Illinois Manufacturers’ Association at the Abraham Lincoln Hotel in Springfield on Wednesday. (Photo by Jerry Nowicki/Capitol News Illinois)

SB 690 would provide for a property tax freeze on school districts if the state meets approximately $650 million in annual K-12 education spending starting in 2021. The freeze would exclude levies for debt and pensions. SB 689 would eliminate Illinois’ estate tax which currently applies to estates exceeding $4 million.

No Republicans voted for either bill, as opponents said the property tax freeze would apply only in unlikely circumstances, while the estate tax repeal could be reversed at any time.

Prior to the Senate’s vote, Pritzker addressed members of the Illinois Manufacturers’ Association and Illinois Retail Merchants Association – two organizations opposed to his signature revenue proposal — at a business day event at a Springfield hotel.

Pritzker was warmly received despite the two groups’ opposition to the graduated tax, and he said the measure was needed to prevent “a hike in the flat income tax.”

Pritzker drew applause when he touted funding increases for workforce development programs, vocational training, community colleges and apprenticeship programs. He also urged those in attendance to lobby legislators for an infrastructure bill and the revenue streams which would make it possible.

After Pritzker’s pitch, IRMA Chairman Jim Havey signified those in attendance were unmoved by the arguments as he assailed the graduated tax and said there was “no limit” to the restrictions elected officials were willing to impose on Illinois businesses.

The constitutional amendment and package of tax bills now move to the Illinois House, where Republicans plan to keep up their unanimous opposition.

Speaking at a Statehouse news conference before the Senate vote, four House Republicans said the Senate version of the proposed rate structure, which is slightly different than the one Pritzker first proposed, proves how easy it would be for lawmakers to raise taxes on certain income classes in the future. 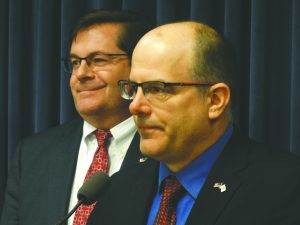 Republican Reps. Mark Batinick (front) and Grant Wehrli argue against adopting a graduated income tax during a Statehouse news conference Wednesday just hours before the Senate voted on a constitutional amendment to allow such a tax. (Photo by Peter Hancock/Capitol News Illinois)

“We told you so,” said Rep. Margo McDermed, a Mokena Republican. “We told you that the Democrat-controlled General Assembly would not be content once they had a right to have graduated tax rates. Yesterday, state senators released new rates that would put in place income tax rates even higher than what the governor proposed just two months ago. They could not maintain discipline for even two months before they raised rates.”

Rep. Grant Wehrli, a Naperville Republican, offered a glimpse of the kinds of political attacks Republicans will use to challenge the validity of Pritzker’s “fair tax” slogan.

“Just last week we learned that the governor and his family are under federal investigation for what the Cook County Inspector General’s report calls a scheme to defraud,” Wehrli said. “And yet he’s looking for fairness. The scheme to defraud resulted in $331,000 being due to the famous ripping out of toilets on an Astor Street mansion. So let me ask you this: If you rob a bank and then return the money, are you still not a criminal?”

In a separate statement, House Republican Leader Jim Durkin, of Western Springs, called the Senate vote “a slap in the face to thousands of Illinois families and businesses; just another step towards handing a blank check over to the Democrats and their reckless spending habits.”

There are 74 Democrats in the House, which needs 71 votes to pass the amendment. Democratic House leaders have not yet announced when they plan to take up the package.