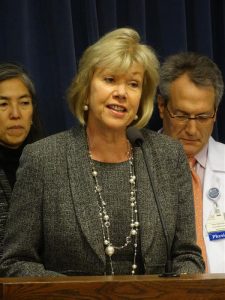 Sen. Julie Morrison, a Democrat from Deerfield, speaks Feb. 5 during a news event in Springfield about raising the minimum age to purchase tobacco products in Illinois to 21. The legislation passed later in the session. (Photo by Peter Hancock/Capitol News Illinois)

SPRINGFIELD — Some Illinois lawmakers say a new U.S. Food and Drug Administration policy responding to a growing trend of youth e-cigarette use does not go far enough.

The federal public health watchdog announced in a memo last week it would crack down on the “manufacture, distribution, and sale” of fruit- and mint-flavored electronic smoking cartridges for cigars, hookahs and cigarettes, among others. The guidance excludes menthol and tobacco flavors.

But that addresses only part of the problem, say health advocates and legislators who sponsor related bills.

Even though the U.S. Congress banned all flavored cigarettes — except for menthol — over a decade ago, menthol is still popular among youth. A 2016 study found more than half of those smokers use menthol-flavored cigarettes, compared to roughly one-third of adult smokers.

Vicki Vasconcellos, president of The Smoke Free Alternatives Coalition of Illinois, does not dispute that youth are “abusing” flavored products. She argues, though, lawmakers’ priority should be enforcement of the Tobacco 21 statute which prohibits the sale of products containing nicotine to those under the age of 21.

That provision is also included in a 2019 amendment to the Federal Food, Drug, and Cosmetic Act.

The FDA, in its memo, explained the policy change as prioritizing enforcement against companies that market to customers without actively taking steps to prevent minors from accessing their products. It also considers the potential risks created by extended availability of new tobacco products without scientific review, according to the document.

Deerfield Democratic Sen. Julie Morrison said she is “glad they went as far as they did,” but a loophole remains in curbing youth’s access to flavored products.

“The FDA was ruling only on the pods, and one of the other sources obviously is the large containers that are sold so you can fill your own,” she said. “I think that should be subject to the same restrictions.”

Her legislation, proposed in late October, would prohibit all flavors of those goods — bottled liquid users need to fill cartridges themselves — and other nicotine devices.

Shana Crews, government relations director for the American Cancer Society’s Cancer Action Network, said the administration’s action “doesn’t preempt any strong, comprehensive state or local policies on tobacco, so Illinois can go forward and put a public health strategy in place to prevent kids [from] becoming addicted to e-cigarettes and other tobacco products.”

Morrison’s bill is similar to one introduced by Rep. Deb Conroy, a Democrat from Villa Park. Sen. Jim Oberweis, a Republican from Sugar Grove, and Rep. Grant Wehrli, a Republican from Naperville, both proposed measures that would allow the sale of menthol, mint and tobacco flavors.

All three did not return requests for an interview.

Legislative efforts to regulate flavored electronic smoking devices during the fall veto session were unsuccessful, Morrison said, due to the “short period of time” the General Assembly had to consider the initiative. She added attempts were further slowed because “big tobacco is a huge interest.”

Democratic Gov. J.B. Pritzker’s “top priority is the health and safety of our young people, that’s why he supports banning flavored vaping products that entice our youth,” a spokesperson said in an email, though she did not say definitively if he agrees further state action is necessary.

The federal administration’s policy “should have a minimal impact” on vape shops, according to its memo. Vasconcellos, who owns several such stores, said her “knee-jerk” reaction is small business owners will not shutter as they “likely” would if a more restrictive state law is passed. At least 85 percent of the products Illinois shops sell, she estimated, are flavored.

“We are breathing a sigh of relief that we can continue to feed our families and pay our mortgages,” she said.

The FDA has authority to regulate e-cigarettes and vapes, for example, through the Family Smoking Prevention and Tobacco Control Act. In August 2016, it reinterpreted the legal definition of a tobacco product to include all electronic smoking devices.

Manufacturers of e-cigarettes are required to apply for authorization before marketing their products as a “modified tobacco” device.

That process “(ensures) that FDA has the necessary information to exercise adequate, timely oversight over these relatively novel and potentially harmful products,” according to the new policy.

Because no electronic nicotine delivery systems have been authorized “to date,” all such products are “considered illegally marketed,” according to the administration.

The FDA’s guidance is not binding, which means it can be changed at any time the public health watchdog deems necessary.

A spokesperson for the Illinois Department of Public Health said the agency is “ready to review any legislation from the General Assembly.”

U.S. Sen. Dick Durbin said in a news release, “I believe that (last week’s) announcement is a positive step, but it is far from a comprehensive one.”