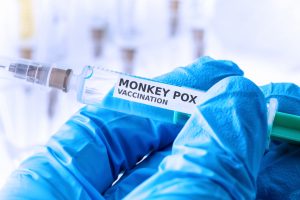 The change is intended to ensure that as many individuals are vaccinated as soon as possible with a first shot to reduce the spread of the virus. IDPH notified healthcare providers of this prioritization on July 28.

With the demand for the vaccine outstripping supplies, IDPH is advising local public health officials that unless people are in certain elevated risk categories, they should receive only an initial dose of the MPV vaccine until more supplies become available.

Illinois is currently reporting 401 cases of confirmed or probable MPV in the state, with 85 percent of them in the city of Chicago and the rest in 13 counties around the state, including Cook County. The state has received 7,371 doses of the Jynneos vaccine and Chicago has received 18,707 doses. The state has designated 4,631 doses of its inventory to the city.

In many instances, this directive will mean that individuals will not get a second dose at 28-days after their first dose. The policy is consistent with the distribution strategy taken in other U.S. jurisdictions, as well as the United Kingdom and Canada. Studies have shown the vaccine offers protection for at least several months after the first dose. IDPH recommends that second doses should be scheduled as soon as sufficient vaccine becomes available.

MPV is a disease that does not spread easily between people without close contact and has primarily affected men who have sex with men. However, anyone, regardless of sexual orientation, can spread monkeypox through contact with body fluids, monkeypox sores, or shared items (such as clothing and bedding) that have been contaminated with fluids or sores of a person with monkeypox.

The virus can also spread between people through respiratory droplets typically in a close setting, such as the same household or a healthcare setting. Common household disinfectants can kill the monkeypox virus.

There are many causes of rash illness. However, if someone has a rash illness that they are concerned about they should talk with, or see, a health care provider about their symptoms. They should not have close contact with other individuals until they have seen a health provider and arranged to be tested. In general, people should avoid close, skin to skin contact with people who have a rash that might be monkeypox.

For more information about IDPH’s response to MPV, go to: https://dph.illinois.gov/topics-services/diseases-and-conditions/monkeypox.html;