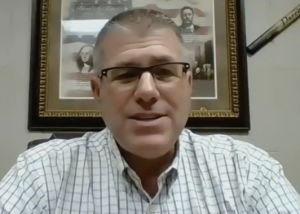 SPRINGFIELD — A hearing in Rep. Darren Bailey’s lawsuit challenging the governor’s authority to issue consecutive executive orders will not be held Friday as scheduled.

Thoms DeVore, Bailey’s attorney, requested the judge rule on that question without a trial. McHaney declined, and now will await DeVore’s written response to the state’s call for the matter to be dismissed.

In a court document filed July 7, the attorney general’s office, which is representing Pritzker, called this last active issue “moot” because any ruling “would not have a practical effect.”

The points raised in DeVore’s arguments that COVID-19 was not a disaster as specified in the Illinois Emergency Management Agency Act were “incorporated” into the two complaints Bailey won, the office added.

McHaney nullified all of the governor’s executive orders related to COVID-19 made after April 8. He also decided that the Illinois Department of Public Health has the “supreme authority” to close businesses and restrict residents’ activities in a public health crisis.

Pritzker’s office, Bailey and legal experts disagree on the scope of that order — some assert it affects only Clay County while others maintain it applies statewide.

Bailey, in an interview with Capitol News Illinois on Thursday, said the court set a deadline of July 22 for DeVore to file a response to the state’s request.

The representative said he will be adding a new complaint to his lawsuit on the same day.

Consolidation is logical, Liberty Justice Center Attorney Daniel Suhr wrote in a filing, because “the legal issues are nearly identical” in both cases.

The Republican Party and Illinois Right to Life organization filed separate lawsuits on June 15 and June 23, respectively, claiming Pritzker’s ban on gatherings of more than 50 people is unconstitutional.

That restriction, implemented to combat the COVID-19 spread in the state, included an exception for houses of worship and seemingly did not apply to Black Lives Matter protests, Suhr argued in both cases. Under the U.S. Constitution’s equal protection clause, restrictions should apply to all groups uniformly or not at all.

U.S. District Court judges in both lawsuits denied the GOP’s and anti-abortion organization’s request for an order temporarily suspending enforcement of Pritzker’s cap on gathering attendance.

In part, Judge Sara Ellis ruled in the Republican Party’s case that its “interest in gathering as a political party … does not outweigh the governor’s interest in protecting the health of Illinois’ residents during this unprecedented public health crisis.”

Judge John Tharp Jr., who presided in the Illinois Right to Life case, called Ellis’ opinion “persuasive” and did not add any details to his own.

According to a document Suhr filed, the attorney general’s office, which is representing Pritzker in the case, does not object to his motion to combine the two lawsuits.

A St. Clair County resident dropped her federal lawsuit against the firm contracted to launch an unemployment claims portal she said was solely responsible for a data breach that made available the personal information of nearly 33,000 Illinoisans.

The web-based system built and maintained by Deloitte Consulting LLP to process some Illinois unemployment claims allowed public access of applicants’ names, Social Security numbers and street addresses, the Illinois Department of Employment Security announced on May 18. The information was only accessed by one person, according to the state.

According to the lawsuit filed by Briana Julius on June 8, at least three other states — Ohio, Colorado and Arkansas — also contracted Deloitte to construct similar portals. Within five days of notice that Illinois’ system was compromised, both Colorado and Ohio made announcements their portals had the same flaw.

She was suing on behalf of herself and all other Americans who might have been harmed, and she asked a judge to allow a jury trial.

Neither of Julius’ attorneys — Tiffany Yiatras with Consumer Protection Legal LLC and Francis “Casey” Flynn Jr. based at a firm bearing his name in Missouri — returned requests for comment about why their client dropped her case.

In a document filed June 26, the lawyers wrote Deloitte never submitted arguments on its behalf or made other motions in court. They informed the judge they were dismissing the case “with each party to bear its own costs.”