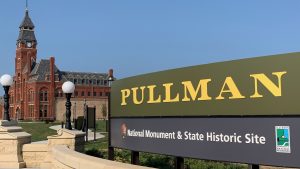 The event featured tours of the visitor center and historic Hotel Florence, interpretive programming, and a host of events and activities organized by partners throughout the Pullman Historic District.

“We are thrilled to celebrate with our partners and visitors the grand opening of the visitor center, which was restored and renovated in part through the generosity of the National Park Foundation and its donors,” said Pullman National Monument Superintendent Teri Gage. “As a partnership park, Pullman National Monument benefits from the thriving urban community we call home, including the many partners whose efforts over decades have made it possible to preserve and share this special place in Chicago and American history.” 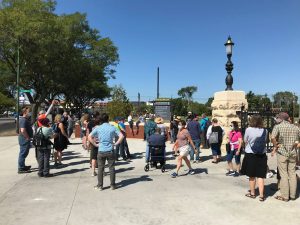 Funded by the National Park Foundation and its donors and combined with an NPS Centennial Challenge Grant, the Visitor Center will feature exhibits and programs that share key moments in American Labor History associated with the Pullman company including the 1894 Pullman Strike and Boycott, and the 1937 African-American Brotherhood of Sleeping Car Porters union winning the first successful contract with a major company.

“Pullman strikers risked their lives to fight for a just workplace and fair wages. This national treasure recognizes their courage and invests in our next generation of labor organizers,” said Gov. J.B. Pritzker who attended the ceremonies. 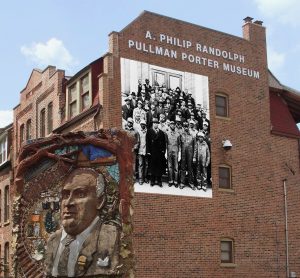 The National A. Philip Randolph Pullman Porter Museum, 10406 S. Maryland Ave., provides a history of the struggles experienced by the Pullman Porters and their ultimate victory in establishing the Brotherhood of Sleeping Car Porters. (Photo courtesy of the National Park Service)

Visitors to the park can get a glimpse of almost a century of evolving workforce and rail equipment production, learn about the lasting design and architecture of the 1880 Town of Pullman, and how a community works together to preserve an historic district. 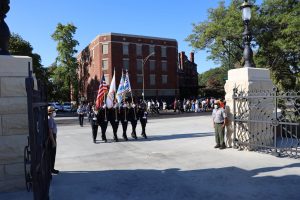 After standing for almost 117 years as a Pullman landmark, the Administration Building was seriously damaged by fire in December 1998. The State of Illinois reconstructed the building in 2005 and in 2015 transferred the building to the NPS to serve as the anchor for the newly designated Pullman National Monument. 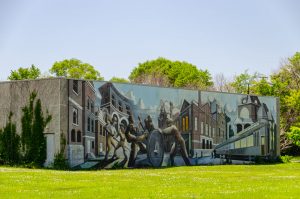 A mural honoring the workers at the Pullman Company, one of the most famous company towns in the United States, and scene of the violent 1894 strike. (Photo courtesy of the National Park Service)

“The Illinois Department of Natural Resources is eagerly anticipating welcoming visitors onto the site and showcasing the multi-million-dollar investment made to transform the grounds into an inviting landscape allowing us to engage with the public about the remarkable and multi-faceted history associated with the Pullman State Historic Site,” said IDNR Director Colleen Callahan.

For more information on the site, visit https://www.nps.gov/pull/index.htm.