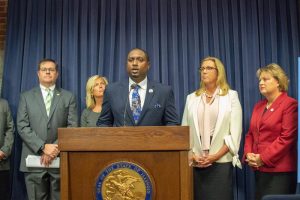 Rep. Maurice West, a Rockford Democrat, speaks during a news conference Oct. 28 at the Capitol in Springfield. West has introduced a bill that would require Illinois’ middle and high schools to include a discussion of sexting in sex education curriculum. (Photo by Jerry Nowicki/ Capitol News Illinois)

SPRINGFIELD — Sex education in Illinois middle and high schools would be required to include a discussion on sexting if a bill introduced in the state House of Representatives becomes law.

House Bill 4007, introduced by Rep. Maurice West (D-Rockford) would require sex education curriculum in grades 6-12 to include material on the legal and social risks of sharing sexually explicit images, messages and videos.

“This is something that a lot of our students are dealing with and are partaking in without really understanding what the consequences could be,” West said.

Issues surrounding sexting that would be required in curriculum include long-term consequences, bullying and harassment, resisting peer pressure and using the Internet safely. Lessons would also have to highlight school and community officials who students can reach out to with a problem.

“There’s no telling what our children are doing on their phones,” West said, “so instead of trying to intrude into their privacy, let’s just make sure they’re educated on even the things that make us adults uncomfortable.”

The bill defines sexting as “sending, sharing, receiving, or forwarding a sexually explicit or sexually suggestive image, video, or text message by a digital or electronic device, including, but not limited to, a mobile or cellular telephone or a computer.”

Illinois would become only the second state to require teaching about sexting in sex education, according to Jennifer Driver, vice president of policy at the nonprofit Sexuality Information and Education Council of the United States, which advocates for modern and comprehensive sex education.

The Los Angeles Unified School District, America’s second-largest, added the risks and consequences of sexting to its curriculum in 2015.

Driver says including sexting in sex education is a “smart response” to a growing practice.

“Young people generally think short term, in the immediate, and so providing the education before it becomes punitive … is a very responsible way to address sexting,” she said.

A 2018 study of 110,000 teenagers published in the Journal of the American Medical Association found 15 percent had sent sexts and 27 percent had received them. Twelve percent also admitted to sending a sext of someone else without their consent.

Sexting between minors is illegal in 25 states including Illinois, according to a 2018 analysis by the Cyberbullying Research Center. Illinois law forbids minors from sharing sexual images and videos of themselves via any electronic method, such as texting, social media and smartphone apps. The penalty is usually community service or counseling.

Illinois is one of 24 states plus the District of Columbia that require sex education. School codes require sex education lessons in Illinois to be age-appropriate, evidence-based and medically accurate. Parents have the option to take their children out of class if they object to the material.

“It is my hope that schools will be understanding of this because this is one thing that we really can’t control,” West said.

Ben Schwarm, deputy executive director of the Illinois Association of School Boards, predicts his organization will oppose the bill once it is assigned to a committee.

“We oppose all new curricular mandates. It has just really grown out of control,” he said.

West, however, said he does not believe it would be an unnecessary mandate.

“We’re just simply saying we need to acknowledge the elephant that’s in the room,” he said.

West said sexting has already come up among a group of middle school boys he mentors.

“I’m telling them the ramifications to it and telling them how, though you may feel that this is pretty cool now, it can be detrimental later,” he said.

“But that’s just with six boys that I mentor. There’s a lot more out there that may not be getting that same kind of guidance.”

Driver said she agrees that sex education should meet young people where they are.

“I think very much how we’re trying to keep up with technology, we need to be keeping up with sex education at the same time so that one doesn’t happen without the other,” she said.

West introduced the bill in December and is reaching out to fellow lawmakers from both sides of the aisle for support as the General Assembly prepares for its 2020 session beginning Jan. 28.