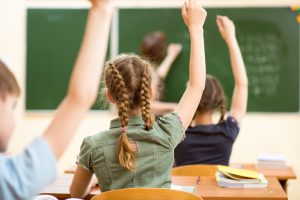 The goal of the EBF formula is to gradually bring all districts up to an “adequate” level of funding, or having enough resources to cover the cost of providing the educational services the state expects. Enrollment totals, poverty rate, and the number of English language learners are just some of the factors considered.

SPRINGFIELD – Five years ago this month, Illinois lawmakers passed legislation that overhauled the way public schools in the state are funded.

The so-called Evidence Based Funding formula, or EBF, was designed to calculate the actual cost for each district to provide the kind of education the state expects, and then gradually increase the share of that cost that’s paid for by the state.

Over time, it was also supposed to narrow the disparity between the best-funded and worst-funded districts in the state, with the hope of lowering property taxes and improving academic achievement in the most underfunded districts.

Five years later, huge disparities still exist among districts, both in funding and academic performance, but lawmakers from both parties who were part of negotiating the new law say it has provided huge benefits, especially to those schools that were most underfunded.

“I use the example of East St. Louis, that I think at the time had the highest property tax rate but was nowhere near adequate spending,” said Andy Manar, a former state senator and now deputy governor who was a chief architect of the plan.

“And if you did the math at the time, the math would show that East St. Louis literally could not tax itself enough to generate the funds needed to say that the school district has an adequate level of spending to achieve the results that we as a state expect of that school district. They literally could not tax themselves into equity. It was mathematically impossible.”

Republican state Sen. Chapin Rose, who represents a largely rural area in east central Illinois, said many of the districts in his area faced the same challenge.

“I do think that for many of the areas I represent, it was a lifeline,” he said. “It’s kept doors open and, in some instances, provided a much needed infusion, because they simply couldn’t keep going back to the property tax well. That was dried up.”

Illinois has traditionally relied on local property taxes to fund most educational spending. That has automatically led to built-in inequities because districts with relatively low levels of property wealth per-pupil must levy higher tax rates to raise the same amount of money as wealthier districts.

To offset those differences, prior to adoption of the EBF formula, the state used a complex formula to distribute state aid that was supposed to guarantee districts with modest tax bases a certain minimum level of “foundational” funding, although even the wealthiest districts received aid under that formula, even if they were more than able to raise adequate funding on their own.

Many districts complained that the formula never lived up to its promise of guaranteeing adequate funding to all districts, in part because the General Assembly did not fully fund the formula. Instead, it distributed “prorated” amounts, based on how much money was available in the state budget at the time. 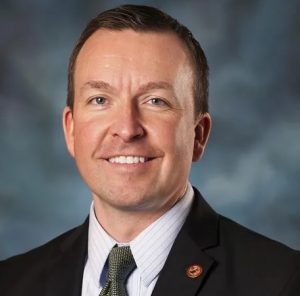 Manar cited the example of Harrisburg High School, in southern Illinois, where the ceiling of the library had been removed because the district didn’t have enough money for basic repairs and maintenance.

“And, you know, we held a town hall on school funding in that library – the location underscored the need for the bill,” he said. “And Harrisburg High School wasn’t unlike so many other places across Illinois, not just rural parts of the state. It was a result of years of proration of general state aid, and years of the inability to tackle the very complicated nature of school funding.”

For decades, school districts across Illinois tried to turn to state courts to correct  the inequities, arguing among other things that the 1970 Illinois Constitution provides that, “The State has the primary responsibility for financing the system of public education.”

But state courts have consistently declined to get into the school finance fray. As far back as 1973, the Illinois Supreme Court ruled that that provision was merely “a hortatory expression of a goal to be achieved” and not a mandate for the state to take over school funding.

In 1990, a group of 50 school districts calling themselves the Committee for Educational Rights sued the state claiming the system produced vast disparities in educational resources between rich and poor districts in violation of several provisions of the Illinois Constitution, including its equal protection clause and a clause requiring the state to provide “an efficient system of high-quality public educational institutions and services.”

But when that case reached the Illinois Supreme Court six years later, the justices ruled there were no judicial standards to determine whether the state was providing “high-quality” education and that the decision about how to fund schools – and how to balance the competing interests of equity and local control – was a legislative matter, not a judicial one.

After more than a year of negotiations, Illinois lawmakers finally struck a deal that would, over a period of years, put more state money into public schools to bring the least-funded districts up to a level of adequacy – assuming, of course, that the General Assembly lives up to its obligations.

The final vote came during a special summer session in August 2017, during which lawmakers also ended the two-year budget stalemate with Republican Gov. Bruce Rauner.

The goal of the new formula is to gradually bring all districts up to an “adequate” level of funding, or having enough resources to cover the cost of providing the educational services the state expects. That takes into account a district’s total enrollment, poverty rate, the number of English language learners and a host of other factors.

Each year, under the law, the state is to add at least $350 million in new funding for schools, with the bulk of that money going to those furthest from adequacy. But the law provided that no district would see a reduction in funding from the final year before its passage, a so-called “hold-harmless” provision that meant even the wealthiest districts would continue to receive state aid.

People on both sides of the aisle said that was necessary because without a hold-harmless provision, the bill never would have passed.

“It’s a living breathing formula, and it changes year to year, and so the mechanics of the formula eventually fade that out,” Manar said. “But I think it brought a level of certainty. It brought a level of guarantee and, frankly, a level of comfort to a very complicated question of how we reform a very complicated and important system. …So a lot of people didn’t like it. I personally did not. But it was necessary to get it done.”

Republican Sen. Jason Barickman, of Bloomington, who was also a key negotiator in the process, agreed that it was politically necessary.

So far in the first five years, the state has met or exceeded that funding target in all but one year, raising the state’s share of school funding from $6.9 billion in fiscal year 2017, the last year under the old formula, to $9.8 billion allocated this year.

It also drove the state’s percentage of K-12 education upward, according to ISBE data. In FY 2017, the state provided 24.4 percent of K-12 funding. In FY 2020, the latest year for which audited numbers are available, that number rose to 27 percent. 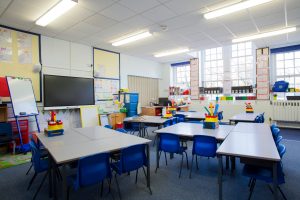 Five years after Evidence Based Funding formula was adopted, huge disparities still exist among districts, both in funding and academic performance, but lawmakers from both parties say it has provided huge benefits, especially to those schools that were most underfunded.

According to data from the Illinois State Board of Education, it would still take another $3.6 billion in state funding this year alone to bring all districts up to 90 percent of “adequate” funding, a goal set in statute. But the state has made some progress toward addressing the needs of the least-funded districts.

In the first year of evidence-based funding, there were 168 districts that were funded at less than 60 percent of adequacy. Those were the ones that were first in line for new funding when the EBF formula took effect.

For the upcoming year, there are only two districts below that level – Washington Community High School District 308 in Tazewell County and Chaney-Monge School District 88, an elementary district in Will County. Both are funded this year at 59 percent of adequacy.

The gap between the least-funded and best-funded districts has also narrowed, if only slightly. During the first year, funding levels ranged from a low of 47 percent to a high of 288 percent of adequacy. This year, the gap ranges from 59 percent to 270 percent.

Gov. JB Pritzker said during a recent news conference he believes the state must continue to increase its investment in education to increase outcomes and decrease reliance on property taxes.

“A lot of good has been done, there’s no doubt about it,” he said. “And as you know, Evidence Based Funding was both necessary to get money to the schools that needed it most and to make sure that we’re improving the education funding overall, across the state of Illinois. I personally think that we need to fund our education system even more.”

So far, though, there is little evidence that the new money has helped improve academic performance for students because the COVID-19 pandemic severely interfered with annual testing in 2020 and 2021.

Prior to the pandemic, though, the connection between school funding and student achievement was evident.

For example, in 2019, the last year before the pandemic, Central City School District 133, an elementary district in Marion County, was the least-funded district in the state at 52 percent of adequacy. That year, only 26.8 percent of its students met or exceeded state standards in English language arts, and only 8.5 percent did so in math.

By contrast, Rondout School District 72, an elementary district in Lake County, was the best-funded district, at 280 percent of adequacy. There, 65.1 percent met or exceeded state standards in English language arts while 49.4 percent did so in math.

Like many states, Illinois did not administer state assessments in 2020 due to the pandemic, and results from the 2021 tests are believed to have been affected by the pandemic. Results of the 2022 tests will be released later this year.

Barickman recalled there was a debate over whether to tie increased funding to improved student outcomes, to hold districts accountable for the new money they would receive. In the end, he said, lawmakers chose to go another route by pairing the new funding system with a form of taxpayer-supported scholarships for private schools, what is now known as the Invest in Kids Act.

“No one was fully, you know, exactly happy, which generally means we probably did a decent job, I suppose,” he said. “But we chose not to penalize failing school districts, but to equip children and families with resources that might give them a choice on their educational experience. And I think we’ve seen a lot of success with that program.”

Manar, meanwhile, argued that the achievement gaps are the result of many factors, including decades of inequitable funding, which the state has only recently started to address.

“What would those test scores have been had the least equitable system of school funding in the country been allowed to continue?” he asked.

He said as more money was put into the old formula, it made the inequity gap wider.

“So you know, those stats and that data aren’t gathered in a sterile, perfect environment. There’s a lot of things happening in 850 some-odd school districts in the state that have an impact on that too.”