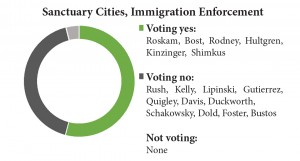 Sanctuary Cities, Immigration Enforcement: The House on July 23 voted, 241 for and 179 against, to deny certain law-enforcement grants to so-called “sanctuary cities” that decline to act as an arm of federal immigration enforcement. The GOP-drafted bill (HR 3009) is a response to a recent murder in San Francisco, a sanctuary city, in which an illegal immigrant with felony convictions allegedly gunned down Kathryn Steinle after city authorities released him from custody. Officials in sanctuary cities say that to assist with federal immigration enforcement would undercut community-policing efforts that depend on rapport with immigrant populations. Backers of the bill said cities are required by law to comply with federal requests that they detain illegal immigrants.

Bob Goodlatte, R-Va., said the bill is needed because “hundreds of sanctuary cities are violating federal law by prohibiting their law enforcement officers from sharing information with federal immigration authorities to enable the removal of unlawful and criminal aliens.”

Jerrold Nadler, D-N.Y., said: “Many cities, including New York, have made the reasonable determination that they will not question victims of crime or witnesses to a crime about their immigration status. They believe it is counterproductive to make them afraid to cooperate with law enforcement.” 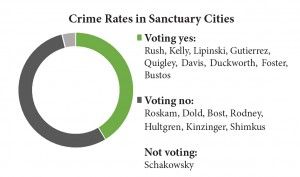 Crime Rates In Sanctuary Cities: Voting 181 for and 239 against, the House on July 23 defeated a bid by Democrats to block any funding cuts under HR 3009 (above) that would reduce a city’s deployment of police on the beat or raise its crime rate with respect to domestic violence, sex crimes or crimes against children.

Hakeem Jeffries, D-N.Y., said: “I stand with the…Constitution and the Tenth Amendment limitation on the federal government’s ability to commandeer state or local police authorities into the service of federal areas of enforcement.”

Bob Goodlatte, R-Va., said: “The Supreme Court has held that Congress can place restrictions or conditions on the receipt of federal funds to further policies that are aimed at protecting the general welfare.”

A yes vote was to adopt the motion, which, had it prevailed, would have immediately amended the bill. 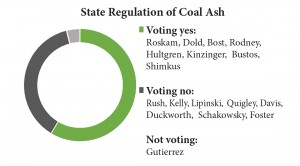 State Regulation Of Coal Ash: Voting 258 for and 166 against, the House on July 22 passed a GOP-drafted bill (HR 1734) that would give states rather than the Environmental Protection Agency primary authority to regulate the coal ash discharged as waste by the nation’s 500-plus coal-fired power plants. The bill would put states in charge of permitting and enforcement under a new EPA rule for regulating coal ash impounded in ponds or landfills near these plants. The federal rule takes effect Oct. 19. Addressing factors such as the structural integrity and location of storage sites, it is designed to protect drinking water, groundwater and air quality from ash containing elements such as arsenic, cadmium, chromium, lead and selenium.

The EPA began its rulemaking process in response to a December 2008 spill at a Tennessee Valley Authority facility at Kingston, Tenn., which spread coal-ash sludge over 300 acres and into the Emory and Clinch rivers.

Frank Pallone, D-N.J., said the bill “is about undermining important health and environmental protections, and that is why it faces widespread opposition.” 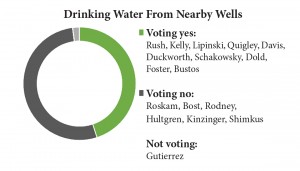 Drinking Water From Nearby Wells: Voting 192 for and 231 against, the House on July 22 refused to require operators of coal-ash impoundment sites to provide notification and alternative sources of safe drinking water to properties within one-half mile whose wells show signs of coal-ash contamination. The Democratic-sponsored amendment was offered to HR 1734 (above).

Alma Adams, D-N.C., said that as a result of a spill into the Dan River in 2014, her state now requires similar protections. “North Carolina learned the hard way that when state regulators stick their heads in the sand to allow the unfettered disposal of coal ash, spills happen,” she said.

John Shimkus, R-Ill., said: “But I assure you that (the bill) already mandates that, if disposal units are causing problems, states will utilize all available authorities to ensure that their citizens have safe drinking water.” 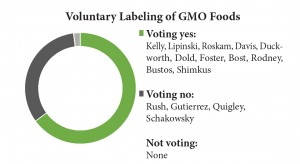 Voluntary Labeling of GMO Foods: Voting 275 for and 150 against, the House on July 23 passed a bill (HR 1599) that would establish a system of voluntary, state-administered labeling requirements for foods that contain genetically modified organisms (GMOs). In addition, the bill pre-empts any existing or future state or local laws that establish mandatory labeling of genetically engineered foods. At present, there are no federal requirements for GMO labeling.

Dan Newhouse, R-Wash., said: “What we need is a national voluntary label, much like organic, a label which gives consumers who want to purchase non-GMO foods the freedom to do so, but that will not impose higher costs on producers or consumers.”

Tulsi Gabbard, D-Hawaii, said the bill “makes a mockery of transparency and leaves U.S. consumers in the dark….Why deprive Americans of the ability to make educated choices about whether they want food with genetically modified ingredients?” 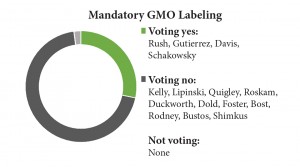 Mandatory GMO Labeling: Voting 123 for and 303 against, the House on July 23 defeated an amendment to HR 1599 (above) that sought to require mandatory, federally administered labeling of foods containing genetically modified organisms (GMOs). This would replace the underlying bill’s voluntary state-level approach.

Peter DeFazio, D-Ore., said: “Americans want to know what is in their foods. Don’t put them in the dark.”

Mike Conaway, R-Texas, said mandatory labels can be misleading because they “are used as a warning or a caution….”

A yes vote was to establish federally mandated labeling of foods containing GMOs. 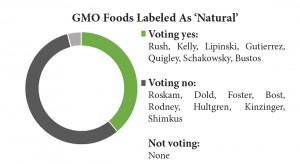 GMO Foods Labeled As ‘Natural’: Voting 163 for and 262 against, the House on July 23 refused to prohibit food labeled as “natural” from containing genetically modified ingredients. The vote affirmed wording in HR 1599 (above) that allows Food and Drug Administration and U.S. Department of Agriculture definitions of “natural” to include GMO foods.

Rosa DeLauro, D-Conn., asked: “Does the word `natural’ really (apply) to a salmon engineered to grow at double the normal rate?…A tomato with fish genes? Are these things natural? Our common sense says no.”

Rodney Davis, R-Ill., said: “There are no clear and consistent standards for the term `natural,’ which is why we are trying to correct this in this bill.”

A yes vote was to prohibit foods containing GMOs from being labeled as “natural.” 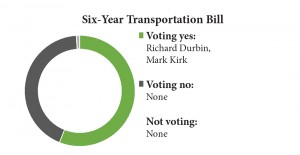 Six-Year Transportation Bill: Voting 62 for and 36 against, the Senate on July 22 agreed to start debate on a bill (HR 22) that would authorize $317 billion over six years for highway and mass-transit construction projects. Because the Highway Trust Fund is projected to raise only $240 billion over the next six years to finance these projects, the bill faces a shortfall of $77 billion that would be funded by revenue increases or spending cuts yet to be fully determined. If the bill clears the Senate, it would have to be reconciled with a House-passed measure to fund transportation programs only through Dec. 18.

— How They Voted: Illinois Representatives’ Votes in Congress —