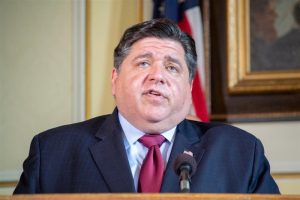 SPRINGFIELD — Illinois is one of the last states to apply and be approved for a federal program providing an additional $300 in unemployment assistance per week to qualifying residents.

Gov. J.B. Pritzker announced Aug. 31 he instructed the Illinois Department of Employment Security to submit an application “despite serious concerns about the unfairness” of the program. The Federal Emergency Management Agency certified that request on Sept. 1.

Funding for the Lost Wage Assistance Program was redirected by President Donald Trump from the agency’s disaster relief fund. That money is typically used to finance the federal government’s response to major domestic disasters, such as assisting hurricane survivors.

Trump issued the order in July shortly after a measure creating $600 in added weekly benefits through the federal Coronavirus Aid, Relief, and Economic Security, Or CARES, Act expired.

Up to $44 billion is available to states through Dec. 27, or until the funding runs out. Benefits can be retroactively paid to eligible Illinoisans, starting with the week ending Aug. 1.

The governor’s office, in a news release, estimated that funding will be exhausted in three weeks. It cited unspecified “economic projections for the demand of these funds.”

Only those Americans who are eligible for at least $100 per week in unemployment benefits qualify for the extra $300 in federal funding. That is why Pritzker said Illinois did not apply for the program sooner — about 55,000 residents will be excluded, according to his office.

As of Sept. 2, 45 states are approved to receive grants, including Illinois, which was the 44th state approved. Applications were accepted beginning Aug. 15 and the federal government has begun paying out benefits.

“President Trump’s program will likely cut off the most vulnerable workers, create needless competition among the states for these limited FEMA dollars, and sow more confusion among the unemployed, so I want to caution that those eligible for these dollars will likely encounter frustration and unfairness brought on by the president’s short-sighted and short lived program,” Pritzker said in a written statement.

“However, the $300 benefit will provide much needed assistance for those who can get it, too many of whom are facing terrible choices about whether to pay their rent, buy groceries or get medicine,” he continued. “We will do everything in our power to make sure that every eligible recipient can participate in this program.”

Other states developed a work-around to tackle the issue of residents not otherwise qualifying for the extra federal financial assistance. New Hampshire, for example, is supplementing its residents’ unemployment benefits to ensure everyone reaches the $100 threshold.

In Rhode Island, Scott Jensen, the state’s Department of Labor and Training director, said officials will briefly increase residents’ benefits so they qualify for the Lost Wage Assistance program.

Spokespeople for Pritzker and the Department of Employment Security did not respond to questions about whether a similar strategy was considered in Illinois.

IDES is tasked with distributing whatever federal funds Illinois is allocated and identifying which residents qualify for that assistance.

According to the U.S. Department of Labor, 24,116 Illinoisans filed new unemployment claims for the week ending Aug. 29. That is down 2,146 new claims filed the week prior.

The number of those residents receiving continuing unemployment benefits also decreased by more than 35,000, from 593,305 the week ending Aug. 15 to 555,582 the week after.