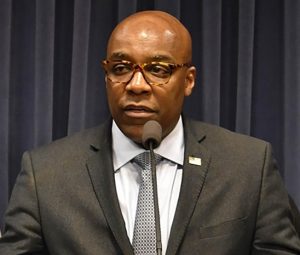 Illinois Attorney General Kwame Raoul, pictured in a file photo at the Illinois Statehouse last year, was co-lead this week on a court brief filed this week in opposition to a Florida law that makes it more difficult for previously incarcerated individuals to vote. (Capitol News Illinois file photo)

SPRINGFIELD – Illinois Attorney General Kwame Raoul was co-lead on a court brief filed Monday, Aug. 3 by a coalition of 20 attorneys general in opposition to a Florida law that makes it more difficult for previously incarcerated individuals to vote, according to his office.

Raoul and Washington, D.C. Attorney General Karl A. Racine led the group that filed an amicus brief in federal court supporting a lawsuit challenging a Florida law that prevents previously incarcerated residents from voting unless they pay all legal financial obligations tied to their sentence.

In a news release distributed Monday to announce the filing, Raoul called Florida’s law a “poll tax,” which was a Jim Crow-era policy intended to keep Black Americans from voting.

“Pay-to-vote laws are discriminatory and serve mainly to suppress Black and other minority voters,” Raoul said in the news release. “I will continue to fight discrimination in any form, which includes ensuring that people who have completed their sentences regain their fundamental voting rights.”

The coalition’s filing posed three arguments: That the law harms low-income residents and does not encourage payment; that it disproportionately impacts Black and Latino communities; and that expanding voting rights for those previously incarcerated promotes reintegration and public safety.

Florida voters approved a state constitutional amendment in 2018 that automatically restored voting rights to felons who completed all terms of their sentence, including parole or probation.

The Florida Legislature later added the financial obligations to the law, but a federal judge blocked the enforcement of those restrictions. In July, however, the 11th Circuit Court of Appeals overturned that decision and issued a temporary order blocking felons who have not paid those obligations from registering or voting.

In an unsigned order in July, the U.S. Supreme Court declined to block the law. The majority did not release a written explanation, but Justices Sonia Sotomayor, Ruth Bader Ginsburg and Elena Kagan authored a dissent citing disenfranchisement close to an election.

The appellate case in the 11th Circuit Court of Appeals is still ongoing, with oral arguments set for Aug. 18, the date of the Florida primary election.

Florida’s amendment would have given 1.4 million felons the right to cast a ballot, but the added restriction of paying legal obligations removed eligibility from hundreds of thousands of those voters, according to expert testimony in the case.