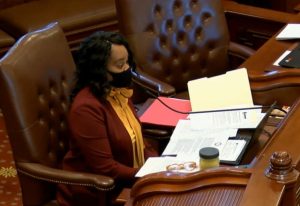 Sen. Kimberly Lightford, D-Maywood, speaks during a Senate Executive Committee hearing Sunday, Jan. 10 at the Capitol in Springfield. Lightford is one of the sponsors of a K-12 education bill that would expand resources for marginalized students and reform education policies that disproportionately harm students of color. (Blueroomstream.com)

SPRINGFIELD — Members of the Illinois Legislative Black Caucus are advancing a K-12 education bill that would expand resources for marginalized students and reform education policies that disproportionately harm students of color.

On Sunday, Jan. 10 lawmakers on the Senate Executive Committee heard testimony from one of the bill’s sponsors, Sen. Kimberly Lightford, and representatives from education groups, including the Illinois Federation of Teachers and Illinois Education Association.

“The Illinois Legislative Black Caucus has created a Black agenda that addresses systemic racism and inequities, so that our children and their children can break this vicious cycle of oppression that has held so many Blacks from reaching their full potential,” Lightford, D-Maywood, said. “This pillar explores our state’s education system through the lens of systemic racism, to identify the best ways to bring an end to inequities and curriculums or practices that often do more to cause racial division than support the needs of our most vulnerable children and young adults in all marginalized, poverty-stricken communities.”

Among the new provisions in the bill is a required assessment for children entering kindergarten that would evaluate their literacy, language, mathematics, and social and emotional development skills.

The bill prohibits the assessment from being used to prevent a child from enrolling in kindergarten or as the sole measure to determine whether a student should be promoted to the next grade level.

Cynthia Riseman Lund, legislative director of the Illinois Federation of Teachers, said her organization opposed the kindergarten assessment proposal because IFT members who work with pre-kindergarteners have raised concerns that the assessment places a burden on classroom teachers and leads to lost instructional time for students.

Lightford said she supports keeping the assessment in the bill because identifying intervention strategies for students as early as possible would help those students better prepare for kindergarten and beyond.

“I think if we take a look as early as pre-school and what those kids’ needs are, then their future teachers won’t be held accountable for when they arrive to them and are not quite prepared,” she said.

Another provision of the bill would allow students who receive intervention services before they turn 3 years old to continue to access those services until the beginning of the school year after their third birthday.

The bill would also create two new programs – Freedom Schools and the Whole Child Task Force – both with the intent of offering additional resources and opportunities to Black students.

Under the Freedom Schools program, Black students would have a supplemental learning opportunity – possibly over the summer – at public schools, with a focus on Black history, developing leadership skills and providing an understanding of the tenets of the civil rights movement. The program would also establish a grant program through the State Board of Education dedicated to improving educational outcomes for Black students.

The Whole Child Task Force recognizes the impact that a traumatic childhood has on young students, that childhood trauma is a greater issue for minority children who live in poverty, and that the COVID-19 pandemic has exacerbated these problems for many vulnerable children.

Other provisions of the bill would automatically enroll students in accelerated courses if they meet certain standards, and establish required computer science standards and courses in the state’s curriculum.

Lightford suggested the bill is still under revision and additional changes are expected as the General Assembly’s lame duck session progresses.

IFT and IEA both opposed provisions in the bill that amended the Invest in Kids Act, which provides scholarships to nonpublic schools through an income tax credit program. Lightford said language regarding the program will be removed from a future draft.

“We’ve long been an opponent of the Invest in Kids Act basically because of that fact that it diverts tax revenue to subsidize public schools in the state when we are already not able to fully fund our public schools,” Lund said.

Those measures would have, among other things, allowed youth who had previously been awarded Invest in Kids scholarships the first priorities for the next year’s scholarships, starting in the 2022-2023 school year, and would have allowed donations to be directed to a certain school or subset of schools.