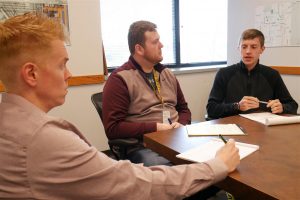 A team at the Illinois Environmental Protection Agency is developing ways to educate the public on how to properly dispose of used e-cigarettes and vaping pens. Pictured are (from left) James Jennings, Brock Titlow and Caleb Froidcoeur. (Photo by Ben Orner/Capitol News Illinois)

SPRINGFIELD — As people worry about the negative effects that electronic cigarettes and vaping pens may have on users’ health, the Illinois Environmental Protection Agency is worried about the damage caused by discarded vaping devices.

A three-member team at the state agency is working on ways to prevent toxic materials in used e-cigarettes and vaping pens from polluting the environment and damaging human health.

The idea came a few months ago from James Jennings, an IEPA employee who works on the project and manages waste reduction and compliance.

“Even though this is advertised as a relatively innocuous alternative to smoking, there are hazardous waste, universal waste and plastics components of this that have real effects downstream,” Jennings said.

Interns Caleb Froidcoeur and Brock Titlow began researching the scope of the problem to see how the IEPA can work with vape shops, retail organizations and local governments to figure out the best ways to dispose of materials.

“Electronic cigarettes themselves are able to be classified as electronic waste because there’s a battery in them,” Froidcoeur said, “and they also fall into the hazardous waste category because of residual nicotine. That kind of poses a unique problem because they don’t fall into just one category.”

E-cigarettes and vaping pens contain many different kinds of materials, each with their own waste regulations. E-cigarettes, which are small, disposable and closely resemble regular cigarettes, contain a battery, nicotine cartridge and a metal atomizer that turns the nicotine liquid into vapor.

Vape pens are larger and more sophisticated, containing a rechargeable battery, tank for liquid, electronic display screen, vaporizing coil and various other metal, electronic, glass or plastic pieces. Another product is disposable vape pods, which are shaped like flash drives and sold by brands like Juul.

“When you dissect these items, there are different hazards and regulatory requirements applicable to each,” Jennings said, “sort of a unique creature that we’re going to encounter more and more as devices become more complicated.”

Some products are also harder than others to separate into different components. For example, Juul nicotine pods are easily removable, but the batteries are sealed up tight.

Because of a lack of information and the unintuitive disposal of these products, users often throw used vaping pens in the trash and in some cases litter used e-cigarettes and nicotine pods.

“Everyone’s walked down a sidewalk and seen cigarette butts everywhere,” Titlow said. “What we don’t want to happen is to have Juul pods be the next cigarette butt on the ground.”

Other than the obvious issue of littering, residual nicotine and batteries pose a toxic hazard to humans and animals.

Used nicotine packages are classified as hazardous waste by Illinois law, but there are no state or federal laws regulating them when they’re part of a vaping pen. So people tend to just throw packages in the trash, which can harm landfill workers and the environment.

“If enough were accumulated, the material can leach through landfill into groundwater,” Jennings warned.

Batteries are trickier. Some can be recycled, while others are a fire hazard to landfills and certain recycling facilities.

“It’s easy for us to see a scenario where this plastic device would be mistaken for something that’s recyclable plastic, thrown in a recycling bin with the battery intact and it causes a recovery facility to go up in flames,” Jennings said.

The team’s first goal is to inform users of best disposal practices.

“Addressing that education gap right now is the biggest concern of ours,” Jennings said.

Though still in the early stages of drafting a plan, the team is looking at creating fact sheets to be posted online and at vape shops. They’re also thinking of providing shops with brochures or information packets to give to customers.

“We’re asking what kind of materials, what kind of information they would want from us, so that we know what to develop to give to them,” Titlow said.

If a user wants to know right now how to dispose of their used pens, the team says to check with your local vape shop, which might at least have a battery collection program. Vape manufacturers might also have product take-back programs, while used nicotine pods could qualify for a local medication collection event.

But that’s about the limit of the team’s advice for now.

“We are still learning and technology is still evolving for the recovery of each component,” Titlow said.

Upper Limits vape shop in Springfield already partners with a recycling company so customers can properly dispose of batteries at no cost.

“They can bring in their spent batteries and we package them up and ship them back out to a recycler,” operations manager Jon Sharpe said. “It’s being responsible.”

One thing that gives the team hope is the significant overlap between environmentally conscious people and vapers. Jennings said research shows that people under 40 years old are more inclined to take additional steps to recycle things properly.

“The people who are largely taking up vaping fall within that same age bracket,” he said.

Sharpe says his battery collection program is popular, and some customers have even brought in used batteries from power tools.

“There are surprisingly a lot of people who actually care about that,” he said.

After publishing educational materials, the IEPA team hopes to work with vape shops to draw up concrete disposal methods. Early ideas include shops dismantling used vape pens and separating the components to be disposed of properly, or organizing nicotine packet collection days.

“If we can get others to realize the opportunities that are out there for partnering with us or battery recyclers, the more we can get to do that, the better,” Titlow said.

Jennnigs says information is also more valuable if customers hear it from their trusted local shop rather than the government.

“If we can provide the retailers information, then they are relaying it, it puts the end user in a better position to make a sound decision than if it’s just coming from us,” he said.

For Sharpe, the vape shop manager, woven through the concerns of littering and toxic pollution is a sincere motivation to preserve the environment and protect human and natural health from a complicated but inevitable new form of waste.

“We only get one planet, so I think everybody’s responsible,” he said. “You’re responsible to not be throwing toxic trash into a landfill that’s going to pollute God-knows-what down the line. It’s all our food supply, it’s all our water supply. I don’t want to drink water that’s contaminated with poison.”