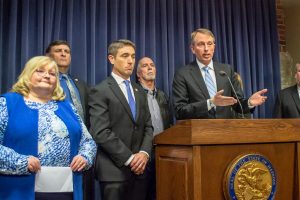 Rep. Patrick Windhorst, R-Metropolis, joins lawmakers and constituents in calling for changes to the state’s Firearm Owners Identification application process during a news conference March 4 at the Capitol in Springfield. (Photo by Jerry Nowicki/Capitol News Illinois)

SPRINGFIELD — Republican lawmakers are calling to abolish the state’s Firearm Owners Identification card requirement — or at least to install fixes to expedite the Illinois State Police’s handling of a backlog of applications that is leaving gun owners in a state of uncertainty.

“My office receives three to five calls almost every day now (with FOID delay concerns),” Rep. Charlie Meier, R-Okawville, said at a Capitol news conference March 4. “Wherever I go, I’m contacted by people that walk up to me, ‘I have a problem with my FOID card.’ You have to explain the process. And you tell them that, you know, you’re not the only one that’s two, three or four months behind. There’s many more.”

Meier and some of his fellow Republican House members said their offices have been “inundated” by callers who have had issues with FOID. They said the delay in FOID card processing has left law-abiding gun owners in the lurch as they await renewals, and two constituents who experienced delays shared their stories at the news conference as well.

“You have several problems here,” said Rep. Michael Marron, R-Fithian. “The first thing is, is that you are taking law-abiding citizens who are trying to exercise their constitutional right to bear arms, and you’re creating a problem for them being compliant with the state law.”

The lawmakers said nearly $30 million in funding was swept from the ISP’s coffers to the state’s general revenue fund from fiscal years 2015 to 2019, including more than $13 million from the Firearm Services Fund which goes to FOID administration.

A FOID card costs $10 and must be renewed every 10 years. Of that fee, $6 goes to the Wildlife and Fish Fund, $3 to the Firearm Services Fund and $1 to the State Police Services Fund.

Rep. Patrick Windhorst, a Metropolis Republican who represents all or parts of the state’s southernmost 11 counties, said his priority is abolishing FOID card requirements in the state, and he noted there are court challenges to the FOID card’s constitutionality.

“Now we understand the makeup of the General Assembly and the possibility that that bill will not be called or not be voted on,” he said of a full FOID repeal. “So there are other pieces of legislation that we feel will address these issues.” 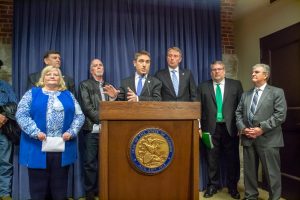 Right now, a FOID cardholder can apply for renewal within 90 days of the card’s expiration date. Windhorst said, due to long delays, this often creates a window between when a FOID card expires and when the cardholder gets a renewed card in the mail.

He said people who file in a timely manner but fall victim to that period can still possess guns legally, and an ISP spokesperson said FOID cards “should remain valid as long as they have submitted the renewal application prior to the expiration of their card.”

But Windhorst said gun owners falling victim to delays often have trouble purchasing guns or ammunition because an expired FOID is not accepted by gun dealers.

Windhorst said House Bill 4447, backed by the group, would move that renewal window to 180 days before expiration in the hopes of closing any overlap between expiration and a lag in processing.

Another measure, House Bill 4448, would require ISP to automatically renew the lapsed FOID card of anyone who has a valid and current concealed carry license as long as the license holder is in good standing with the state. An automatically renewed FOID would expire at the same time the CCL does.

CCLs cost $150 for five years and require training and fingerprinting. The State Police Firearm Services Fund sees $120 of that amount, while $20 goes to the Mental Health Reporting Fund and $10 goes to the State Crime Laboratory.

House Bill 4450, another measure backed by the group, spells out an appeal process for FOID or CCL denials or revocations and provides specific guidelines and timelines for the ISP in processing any such appeal.

A proposed state constitutional amendment would create a “lock box” to place fees collected from FOID and CCL applicants in a fund protected from future sweeps.

At a news conference last month, ISP Director Brendan Kelly called for greater resources to enforce FOID revocations and administer the program, and he backed Senate Bill 1966 which would double FOID fees and require renewals every five years. It also would require fingerprinting of FOID holders.

The lawmakers on Wednesday said the fund sweeps show that more funding is not needed, but rather the funding needs to be used the right way. Marron also said adding fingerprinting to the application process would infringe on rights and serve only to deepen the backlog.

The Illinois State Rifle Association also contended that millions of dollars in the ISP budget went unspent each year between 2015 and 2019. That group is suing the Illinois State Police, its director and the chief of the Firearm Services Bureau for “not acting in a timely manner on Firearm Owners Identification card and concealed carry applications.”

“We at ISRA believe that ISP has enough resources to complete its mission without asking law abiding firearm owners for more money or forcing citizens to be fingerprinted to exercise a constitutional right,” ISRA Executive Director Richard Pearson said in a statement.

Beth Hundsdorfer, an ISP spokesperson, released a statement in response to the Wednesday news conference.

She said ISP “needs the help of the Legislature to streamline and improve the FOID and CCL process,” and is ready to work with Windhorst and others “to shorten and standardize appeals, consolidate FOID and CCL functions, and reduce costs.”

She said FOID administration is separate from the need for enforcement resources for state, county and local law enforcement.