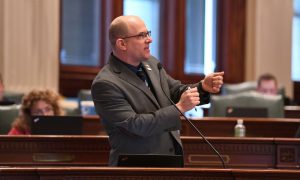 Republican House Floor Leader Mark Batinick speaks on the House floor last year. Batinick, who has served in the General Assembly since 2015, is retiring at the end of his term. (Photo courtesy of Rep. Batnick office)

A father of five who resides in Plainfield with his wife, Batinick said after eight years in the General Assembly, it was either time to try and run for something else or to just move on to better manage his time as a family and business man.

“I felt like it was time to pass the baton,” Batinick, who represents the 97th district which includes portions of Oswego, Montgomery, Naperville, Plainfield, Bolingbrook, Joliet and Shorewood, said. “I’m proud of a lot of the things that I was able to accomplish, especially from the minority side.”

Batinick graduated from the University of Illinois Urbana-Champaign in 1992 with a degree in business education. After that, he started his own contracting company, which he still owns but is now run by his business partner.

He eventually got his commercial real estate license and has been a real estate agent, mainly dealing with small businesses, during his time in the Illinois House.

When the opportunity arose to run for representative, Batinick decided to go for it, since he said at the time he was a “frustrated business guy.” He said he saw a lot of businesses leaving the state, which gave him a feel for what was going on in his local economy, and he thought he could help.

In 2014, Batinick was elected to the Illinois House, taking office at the beginning of a two-year budget impasse under former Republican Gov. Bruce Rauner.

As a freshman lawmaker watching the budget impasse unfold, Batinick said he observed that “so much of Springfield was theater,” and he would watch then-House Speaker Michael Madigan keep everyone busy, “acting like all these things were getting done.”

Batinick said rather than hold committee meetings and hearings regarding the budget, lawmakers were instead having debates over “silly little things,” such as how to label fish on food menus or whether to require repainting of school busses to a different color when they are sold used.

His biggest takeaway over the years, especially from watching the budget impasse, he said, is to watch things unfold and remain focused.

“As time has gone by, I’ve done a better job of just watching the roller coaster and making my decisions based on watching instead of personally being thrown about and getting all emotional about every big change,” Batinick said.

In 2019, Batinick was appointed floor leader for the Republican Caucus. The floor leader serves as the spokesperson for the party’s positions on issues and coordinates legislative strategies.

Batinick said without having to worry about defending the governor’s choices, it allowed him more time to prepare and organize. He noted that he had two goals as floor leader – to prepare in advance to help move things a bit faster and to not debate every bill.

On Mondays, usually the day before session begins, Batinick would make the three-hour drive to Springfield, sit at his desk in a quiet House chamber and read through bills approaching final action. His review would determine which bills were of concern to his party, what questions needed to be asked and who would speak on a certain bill.

When he first became floor leader, Batinick said he quickly learned that the role was not to support or oppose bills as an individual, but to vet them instead. Batinick said he once made the mistake of praising a bill but then looked around and saw some of his members were upset because they hated the bill.

As a freshman lawmaker, Batinick said he was given a book by a colleague that talked about vetting bills to push good policy, and he used that knowledge when it came to approaching bills as floor leader.

Democratic House Leader Greg Harris, of Chicago, who is also stepping down after completing this term, said everyone needs to bring their “A-game” when debating Batinick because he is always well-prepared.

“They chose him for that job because he’s smart and articulate,” Harris said. “He has clear, thought-out principles and is a good man.”

Batinick said one main strategy for advancing good policy as a member of the minority was building outside pressure.

During his first year, Batinick said he introduced a bill that would stop automatic legislative pay increases. It was continuously ignored, even as the state didn’t have a budget, until newspapers started writing about the automatic pay increases.

With outside pressure building, Batinick said Madigan introduced legislation that was the same concept as Batinick’s to stop automatic legislative pay increases.

“Maybe somebody else will take it and get credit for it and that’s fine,” Batinick said. “You just want to push good policy.”

When he first began serving in 2015, Batinick said it was a bit easier to balance everything because his oldest was heading off to college, one was a junior in high school and could fill in as an extra driver, one was in middle school and the other two were still young.

“As crazy as that all sounds, especially with an extra driver, it actually wasn’t too bad,” Batinick said.

Now, with his oldest three kids out the door and the youngest two in junior high and involved in traveling sports, it became difficult to manage fatherhood, running a business and spending a good portion of his time in Springfield.

With eight years’ worth of memorable moments on the House floor, Batinick said his favorite was the bittersweet passage of his final sponsored bill.

That bill, which allows a pension transfer credit for county correctional officers, passed the House unanimously, and his wife, two kids and a few close family friends were able to witness the moment.

He said his family was planning to go to the Abraham Lincoln Presidential Museum, but he texted his wife to have them come to the House gallery for a little bit before leaving because his final bill was about to be called.

“My son was sitting next to me, my daughter and wife were in the gallery and it was pretty special to have that moment with two of my kids there,” Batinick said.